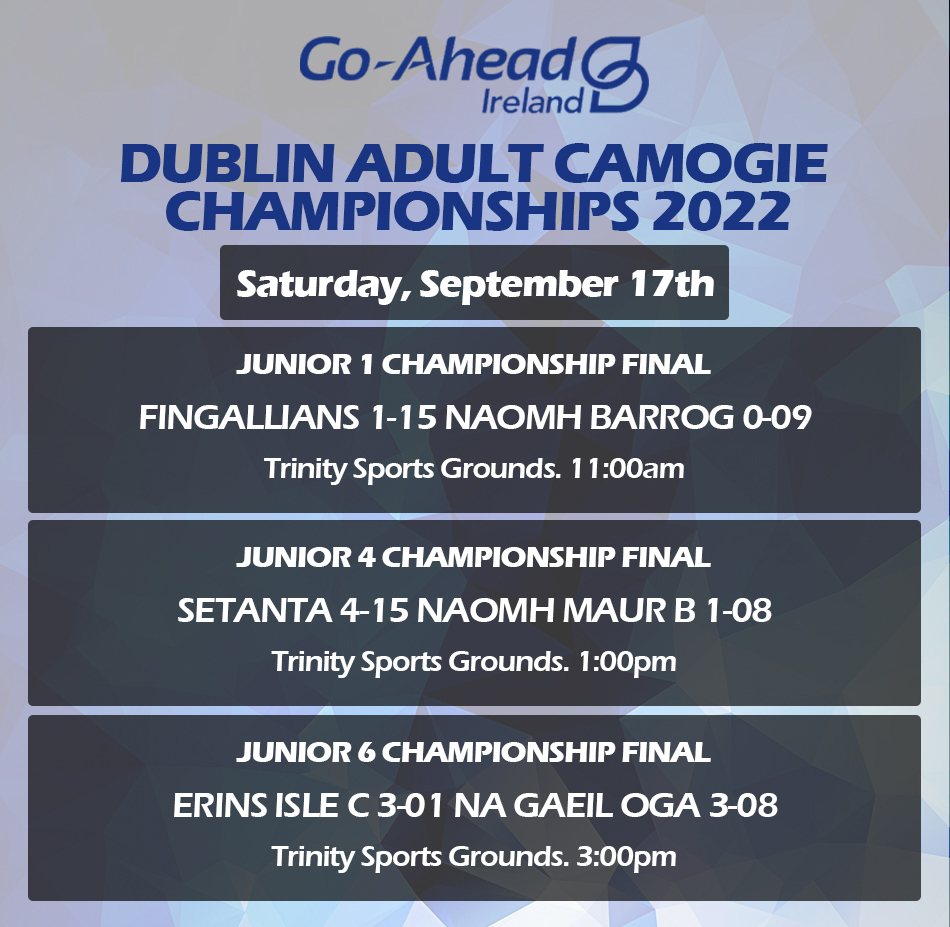 A massive congratulations to Fingallians who picked up the much coveted Junior 1 Camogie Championship crown in the first of today’s three Junior competitions. And unfortunately for Naomh Barrog it was a repeast of their opening round clash of the championship season. Back then the Swords side drew first blood on a 5-09 to 3-09 scoreline and followed that up this morning when it was more crucial to take the silverware by 1-15 to 0-09.

It sees Fingallians run out a 5 game unbeaten season, securing three straight wins in the round robin phase followed by a 4-24 to 0-03 victory over Naomh Jude B in the Semi Finals last week.And they were the only team to beat Barrogs in the competition so Barrogs can feel slightly better having put in a great run to reach the final.

Sixteen points seperated the sides at full time in today’s Junior 4 Camogie Championship Final. And Setanta completed their unbeaten run to secure the title on a 4-15 to 1-08 scoreline. Coming into today’s game it was difficult to call the winner woth both sides finishing clear winners of their respective groups. The newly crowned champions saw off Castleknock B, Lucan Sarsfield D and Faughs/Celtic C to advance to their Semi Final. And a 9-13 to 1-05 victory over Naomh Mernog B in that game got them to today’s clash.

Naomh Maur B took a similar route beating Mearnogs and Naomh Peregrine B. They received a walkover from Commercials in the final round to advance. And they put in an amazing performance to beat Castleknock C by 6-07 to 0-06 to book their place. Unfortunately though they didn’t have enough as Setanta powered through to clicnh the Junior 4 Camogie title.

Na Gaeil Oga got the better of Erins Isle C on the second time of asking this afternoon, and more importantly picked up the Junior 6 Camogie Championship crown for their trouble. They’d lost to Isles in Round 2 of the campaign by 5-02 to 0-05 but clearly did their homework since then to come away with a 7 point victory in today’s decider.

Erins Isle would have been favourites coming into today’s game hving already beaten Oga and Fingallians B to set up their Semi Final with St. Marks. They were 4-02 to 2-06 winners last week booking their slot today. Both sides received walkovers from Ballyboden D and Oga also bet Fingallians before coming out on top against Lucan E by a single point. It;s a great achievement for the Irish speaking club and a great end to their season.

We’ll have plenty more Dublin Camogie action tomorrow with three more Junior finals along with the semi finals in the Senior and Inter competitions. Plus there’s more Junior Shield action to be decided.