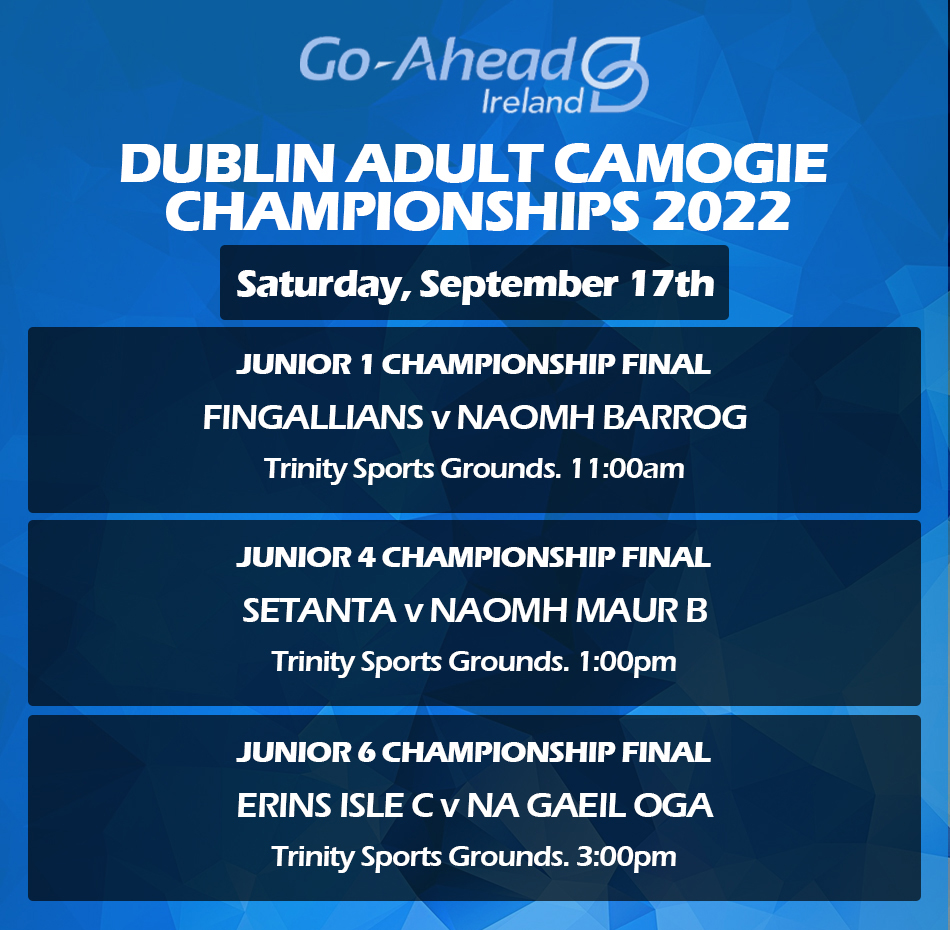 Tomorrow sees three of the 6 Dublin Junior Camogie Championship finals take place with Trinity Sports Grounds hosting all the games. The first three games on Saturday will be the finals of the Junior 1, 4 and 6 competitions. The Junior 2, 3 and 5 finals will be run off on Sunday at the same venue.

Kicking off all the action tomorrow Fingallians and Naomh Barrog go head to head for the Junior 1 Camogie Championship title. It’s not the first time these two side have faced each other in this year’s Championship. Both sides qualified from Group B for their respective semi finals. They met in the opening round of the competition and in that game it was Fingallians who scored a 5-09 to 2-09 victory. Barrog recovered from the loss. And both sides picking up wins over Crumlin and Erins Isle B to secure their Semi Final slots.

Fingallians ran out 4-24 to 0-03 winners over Naomh Jude B in the last four with Barrogs beating Faughs/Celtic B by 1-07 to 0-09. Round 1 will be a distant memory tomorrow when these sides square off for the big prize.

The Junior 4 final between Setanta and Naomh Maur B will be a clash between 2 unbeaten sides who have avoided each other for the entire contest until now. Maurs successfully secured three wins over Naomh Mearnog B and Naomh Peregrine B, receiving a walkover from Commercials in the final round. Setanta beat Castleknock C, Lucan Sarsfields C and Faughs/Celtic C to advance to the semi finals. There they registered a 9-13 to 1-05 win over Mearnogs with Maurs beating Castleknock by 6-07 to 0-06. So both Group winners take their rightful place in tomorrow Junior 4 decider.

Just like the Junior 1 final, the Junior 6 decider is between two sides that have already gone toe to toe in the competition. The Round 2 fixture between Na Gaeil Oga and Erins Isle C ended in a victory for Isles. Both sides beat Fingallians B in the rounds with Ballyboden St. Endas D conceding all their games. That was enough to see Isles and Gaeil Oga advance. Erins Isle were 4-02 to 2-06 winners over St. Marks in their semi final with Na Gaeil Oga beating Lucan Sarsfields E by one point on a 1-05 to 1-04 scoreline.

We’ll round up the results of all three of these finals tomorrow after the last of teh final whistles. And we’ll bring you details of what promises to be a packed Sunday of action in the Camogie Championships