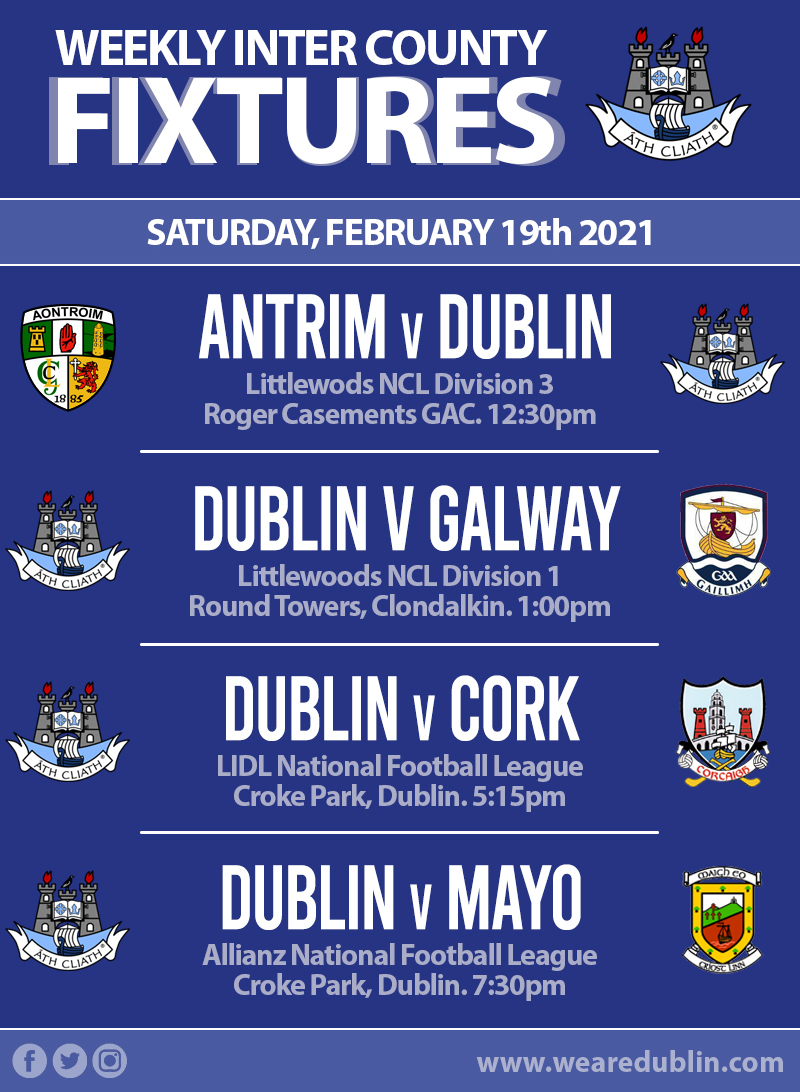 We’ve a busy Saturday of fixtures ahead this weekend with four games playing off from early afternoon until the evening. And it sees the beginning of the Littlewoods National Camogie League for both Dublin’s Intermediate and Senior Camogie teams. We also have a massive football league double header at Croke Park. It comes off last week where Dublin’s Hurlers were victorious over Antrim in the National Hurling League and the Senior Ladies Footballers came away from Dungarvan with a win over Waterford.

It’s a big day for Jimmy Greville and Dublin Intermediate Camogie panel as they start life in Division 3 of the National Camogie League. Their goal is to leave last year’s Division 2 campaign behind them and find their feet with new management at the helm.

Dublin’s 2021 league campaign ended on June 19th with defeat to Tipperary, seeing them lose their Division 2 status. But it’s a new year, and the girls in blue head north to Roger Casement’s GAC to face Antrim in Round 1. It’s one of two trips over the border, as Dublin will face Armagh in Round 3.

Their home games this year will be against Carlow, Roscommon and Cavan with the hope of qualifying for the knockouts and a return to Division 2.

A one point win over Waterford last year in St. Brendan’s Park Birr saw Adrian O’Sullivan’s Senior Camogie panel save their league campaign and stay in Division 1 for another year. But the Dublin manager will look for a vast improvement on their form. Defeats to Kilkenny, Offaly and Clare put them in a relegation battle, and thankfully they came out the better against the girls from the Deise County.

The welcome a solid Galway panel to Clondalkin on Saturday afternoon to begin their league campaign this year. Along the way they’ll travel to Offaly and Tipperary before returning home to face Down in their final round.

After their win over Waterford last weekend, Dublin’s Senior Ladies Football panel are one for one in the National League. The reigning champions will face All Ireland Champions Meath in their final round. But before that they welcome Cork to Croke Park for the first game in Saturday’s massive double header.

Cork come to Dublin off a 2-07 to 1-08 loss to Meath in their opening round game and will be eager to pick up points. Should Dublin come away on Surday with a second win it’ll take some pressure off as they head to Pairc Tailteann in the final round. It’s all about the girls in blue retaining the league title.

After defeats against Armagh and Kerry, Dessie Farrell’s men have it all to do in this year’s National Football League campaign. Many will see Saturday’s fixture with Mayo as a must win game if Dublin are to survive in Division 1.

There are still big absentees in the Dublin camp which has helped Dessie Farrell in his quest to retain the league title they shared with Kerry last year. So all eyes will be on Croke Park at the weekend. Mayo have picked up a win a draw so far and will see this as an opportunity to repeat the win they had over Dublin in last year’s championship. For Dublin, it’s an opportunity to atone. But fixtures are running out in this campaign.

The the fixtures for this weekend. A busy day. Join us for more news and team announcements before the weekend.