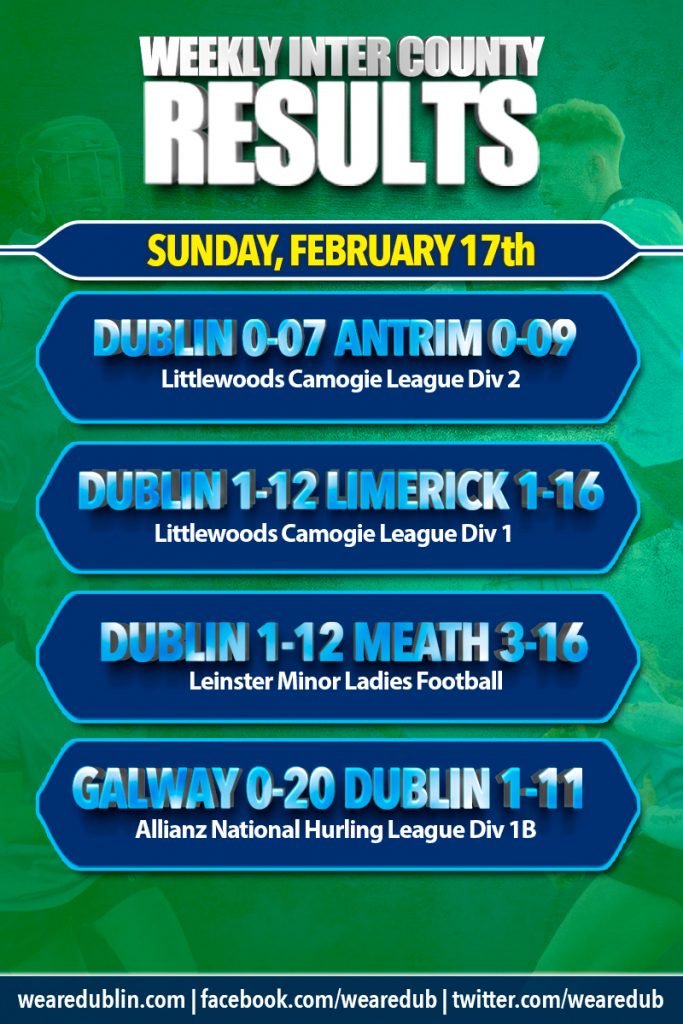 It’s rare we have a weekend without a win. But thankfully it really doesn’t happen too often. Nevertheless today saw four Dublin teams defeated in both League and Championship competitions. Here’s all the details from each game.

Shane Plowman’s Dublin Intermediate Camogie side were defeated today by a solid Antrim outfit. The game was played very close by both sides with Antrim pulling away at the end. Against a massive wind in Parnells Antrim got the better start, but Dublin had levelled the game in the 19th thanks to three frees converted perfectly by Cliodna Nicoletti. Two fantastic Meggan Thomas points either side of another Nicoletti free saw Dublin lead at the break by 0-06 to 0-03.

Ten minutes into the second half Niamh Donnelly and Nicole O’Neill (2) had levelled the tie, and seven minutes later Donnelly edged Antrim in front. O’Neill put two between the sides with 10 minutes to go but another huge ’45 from Nicoletti put Dublin back within reach. Sadly it would be Dublin’s last score and substitute Ciara Boyle got Antrim’s last score from play in additional time as the Ulster side held on for victory.

Dublin travel to Laois in two week’s time for their Round 2 fixture.

Despite a spirited second half in Parnell’s, Franke Browne’s Senior Camogie panel were 0-04 short of Limerick at the final whistle. Limerick remain unbeaten in three games, and Dublin will need a positive result against Clare next weekend to avoid finishing bottom of the group table with Offaly.

Niamh Mulcahy struck nine points for the visitors with Caoimhe Costello, Rebecca Delee and Caoimhe Lyons carrying on their form of the past few weeks. Dublin opened the scoring with a first minute point from Evelyn Twomey. But Limerick comfortably went five clear by the 10th minute. An Ali Twomey score from play, and two Aisling Maher frees had kept Dublin within four score before Rebecca Delee’s 26th minute goal dealt them a massive blow. Mulcahy added a brace of points from frees and it was 1-10 to 0-4 at the break.

Limerick continued to be comfortable and though Dublin finished strongly with a 54th minute goal by Sinead Wylde and points from dead balls by Aisling Maher and Aoibhe Dillon, the result was inevitable. To their credit Dublin returned a promising 1-08 in the second half to Limerick’s 0-06, but the Shannonsiders had done the ground work for the win in the first 30 plus minutes.

Emma Duggan from Dunboyne was in inspirational form today for Meath as she helped her side to a ten point victory over reigning champions Dublin in the Leinster Minor Ladies Football Championship. Duggan registered a tally of 3-6 with 3-03 coming from play.

Meath led at the break by 2-08 to 0-02 having had the aid of a considerably strong wind for the opening 30 minutes. To their credit, Dublin raised their game considerably in the second half with midfield duo Grace Kos and Grainne O’Driscoll, aided by team captain Jodi Egan playing a instrumental part in Dublin’s comeback.

By the 42nd minute Dublin had pulled the deficit back to a single goal (0-12 to 2-09) but Meath showed great resilience and when Duggan bagged her third goal in the 51st minute the result of the game was never in doubt. Egan got Dublin’s only goal of the game in the 53rd minute but it came too late for the home side as Meath finished out the game strongly with points from Duggan (2), O’Rourke and Byrne.

Dublin’s trip to Galway had so much hope but last year’s All Ireland finalists were too strong and ran out comfortable winners, reclaiming the second spot in the Allianz Hurling Division 1B Table. Joe Canning and Cathal Mannion were again on form for the home side. But fielding their most experienced side so far in the campaign proved just how much they needed to beat Dublin, who’ve ran them very close on the last couple of occasions.

Danny Sutcliffe netted a goal for Dublin in the 15th minute, but Galway remained relentless throughout matching and bettering every Dublin score.

And that’s it for this week. Next weekend we see the Senior Men’s and Ladies Football teams back in Croke Park for another Spring Series double header. Dublin’s Minor Camogie Panel get their All Ireland Championship underway. The Senior Camogie Panel travel to Clare for their final National League round game. And the Dublin Senior hurlers welcome table toppers Waterford to Parnell Park for Round 4 of the Allianz National Hurling League.

Stayed tuned to www.wearedublin.com for all the latest news on all these games and more.

Dublin Under 16 Camogie Panel Named Ahead Of Leinster Championship

NAOMH BARROG CROWNED WE ARE DUBLIN SENIOR 7B CHAMPIONS