A win, a loss and a draw over the weekend as three inter county teams round up our weekly results 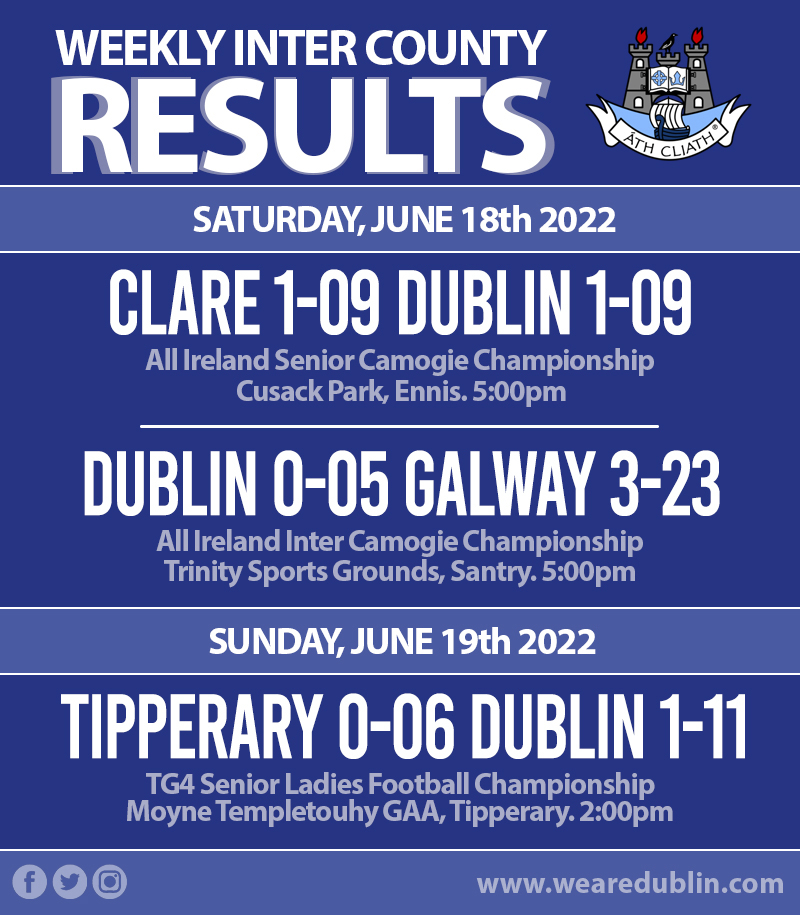 The ladies took centre stage on Saturday and Sunday with three games played. We had the penultimate action in the Round Robin phase of both the Senior and Inter All Ireland Camogie Championships. And yesterday was the turn of our Senior Ladies Footballers in this year’s TG4 Senior Championship. Let’s give you a rundown on the results.

Dublin’s All Ireland Camogie road trip to Clare ended in a welter of excitement. The home team stormed back from a five-point deficit after Leah Butler’s 56th minute score to snatch a 1-9 to 1-9 draw.

Clare Hehir plundered a goal from the very next attack. And Eimear Kelly reduced the margin to the minimum right on the hour. Exchanges were fraught thereafter but it was Clare who found the key score, Lorna McNamara slotting a free in the fifth minute of injury time to bring the sides level.

A brace of McNamara points gave Clare an early advantage but a goal and two points from Aisling O’Neill put the Dubs 1-4 to 0-4 ahead at half-time. It was nip and tuck after the resumption but when Butler arced one over after Issy Davies had done likewise, it looked like Adrian O’Sullivan’s charges had done enough but they had to settle for one point rather than three.

The young Dublin side got right into the battle from the off and fought right to the final whistle, but ultimately Galway’s constant pressure and accuracy from both open play and placed balls told in the end.

Trailing 0-10 to 0-03 at the half time break, Dublin never lay down despite the final scoreline. It simply proved why Galway top the group table and remain unbeaten. Jimmy Greville’s side face Carlow in the final round knowing a win will secure their Intermediate status for next year.

Mick Bohan’s side secured their knockout berth in this year’s Senior Championship with a win over a spirited Tipperary yesterday in Templetouhy. Next week’s final round fixture against Mayo is now down to who finishes first and second in the group, with Mayo beating Cavan in to pick up their second win in the competition.

Nicole Owens was top scorers, bagging 1-02. And yesterday gave the Dublin manager a rare opportunity to make a large number of starting changes and substitutions to weigh up his hand for the remainder of the competition.

Dublin were on top in the opening half but scores were at a premium. Owens added her third goal in two games on eight minutes when she dispossessed the Tipperary defence and broke through to go one-on-one with Lauren Fitzpatrick, the St Sylvesters player made no mistake with her finish.

Tipperary never gave up and stayed close to Dublin throughout the second period, but ultimately Dublin finished the stronger, hitting a flurry of scores in teh closing stages to eventually breakaway from their opponents to finish comfortably.

And that’s a wrap on this weekend’s results from the three Inter County games. We’re back this weekend with More Football, Ladies Football and Camogie action. Stay tuned for match news, team news and so much nore.