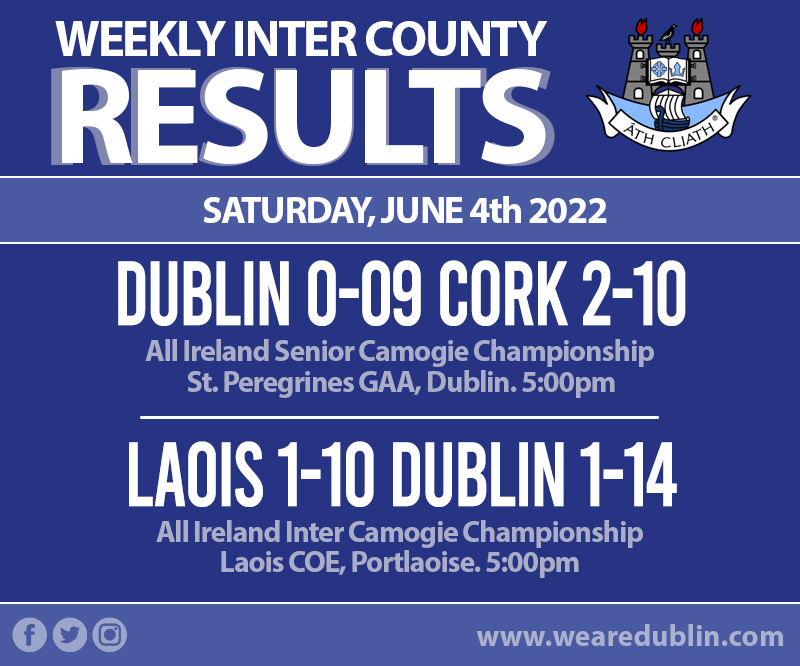 A mixed day yesterday with Dublin results. But it was a very exciting evening of games for Dublin teams in the Glen Dimplex All Ireland Camogie Championships. So let’s get into more details from the results.

A game of two halves is a term that can used too often and unnecessarily. But yesterday evening at St. Peregrines camogie supporters were thrown a whirlwind of emotions, which ended in Dublin suffering their first defeat in this year’s All Ireland Senior Camogie Championship.

After dominating first half proceedings, Adrian O’Sullivan’s charges looked comfortable against an unbeaten Cork side who travelled to the capital for the fixture. Leading by 0-07 to 1-02 at the break, Dublin quickly added another 2 on the restart putting the 4 clear of the rebels.

But Cork’s whole demeanour changed and they immediately became a different team. Katrina Mackey, who bagged Cork’s first goal in the opening half added another, and stringing 0-08 in the second half catapulted Cork to a victory.

For Dublin, there are still two games remaining and they are still in with a shout of the knockout stage of the competition. They travel to Clare in 2 weeks time, with Wexford the following week to end the round robin section.

Jimmy Greville’s Inter Camogie Panel picked up a win on the road yesterday evening, making it their first in the competition. And after losing to Westmeath in their opening fixture, this was a welcome result for the Inters.

The result lifts the Dubs off the bottom of the Group 1 table ahead of their trip to Kerry next weekend. And with Carlow and Galway to come to Dublin after that there is still a lot to play for abd results for the taking. Greville’s girls will still want to compete for a place in at least a quarter final.

That’s all from yesterday’s results. Make sure to stay tuned next weekend for more news, fixtures and results from all of the Dublin Inter County action.