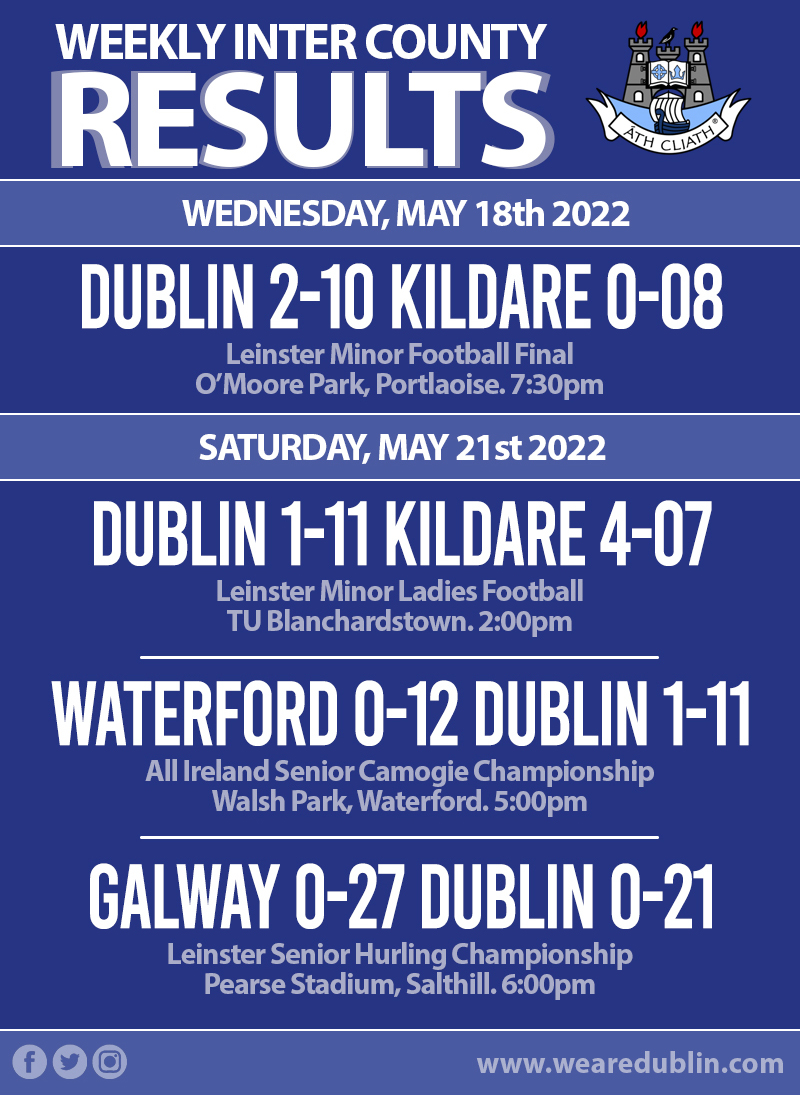 Another busy week has come to a close and we’ve details of four results to bring you. We have news from the Dublin Minors Leinster Championship win. Our Senior Camogoe panel are up and running in their All Ireland Campaign. And our Minor Ladies Footballers and Senior Hurler see their provincial campaigns come to a close.

An impressive second half performance saw Dublin go from 0-05 to 0-04 down to win comfortably by 2-10 to 0-08 and secure this year’s Leinster title. It was looking like Kildare would be following their U20’s to take the provincial honours byt Dublin had other ideas.

If anything this was revenge for Dublin after losing in that U20 football final, and continues the story between these counties ahead of next weekend’s Leinster Senior Final at Croke Park.

Corner Back Ryan Mitchell rocketed the Kildare net in the 34th minute as Dublin took control of the game. And Luke O’Boyle put the exclamation point on the result in the 58th with Dublin’s second goal.

Dublin’s Minor Ladies Football panel saw their Leinster Championship come to an end yesterday after a loss to Kildare in the final round. After losing to Meath in Round 1 and beating Laois last month, yesterday’s game a was a must win following mixed results. Kildare were two for two arriving at TU Blanchardstown. And they proved more effective in front of goal.

Dublin enjoyed more possession yesterday, but the green flags mounted up for the Kildare ladies and they were the deciding factor. The 5 point winning margin really isn’t a proper reflection of the game as both teams went at each other for the hour of football. Fintan O’Curry’s side lead by 1-07 to 2-03 at half time, but late goals from Sophie Ngai and Grace Murtagh turned the tie in Kildare’s favour anf they hung on for the victory.

Dublin’s improvement under Adrian O’Sullivan continues as they defeated Waterford at Walsh Park by 1-11 to 0-12. It was the perfect start in the Senior Camogie Championship They led by 1-8 to 0-8 at the change of ends, Aisling O’Neill, Jody Couch and Aisling Maher all multiple scorers, with Maher notching up the vital 25th-minute goal.

Beth Carton and Abby Flynn were Waterford’s primary scorers and Carton brought her tally to six when equalising five minutes from the end of normal time. Maher restored Dublin‘s advantage from a free and after Clodagh Carroll received her marching orders with a second yellow card three minutes from time, O’Neill split the posts once more.

Disappointment in Salthill and the end of the season for Mattie Kenny’s Dublin Senior Hurlers. Their defeat to Galway combined with Wexford’s win over Kilkenny sees them out of the Hurling Championship altogether.

Dublin had wind advantage in the opening half. But failed to take advantage as they trailed by a point at half time. They also once again relied too heavily on the skills of Donal Burke with not many other scoring options coming to the fore.

Conor Cooney and Conor Whelan lead the scoring charge for Galway as they dominated the second half, winning comfortably on a six point margin. Henry Shefflin can now look forward to another head to head with old mentor Brian Cody.

And that’s the results wrapped up for this week. Be sure to stay tuned for more results next weekend. We have a huge day of action on Saturday including a massive Leinster Final double header at Croke Park.