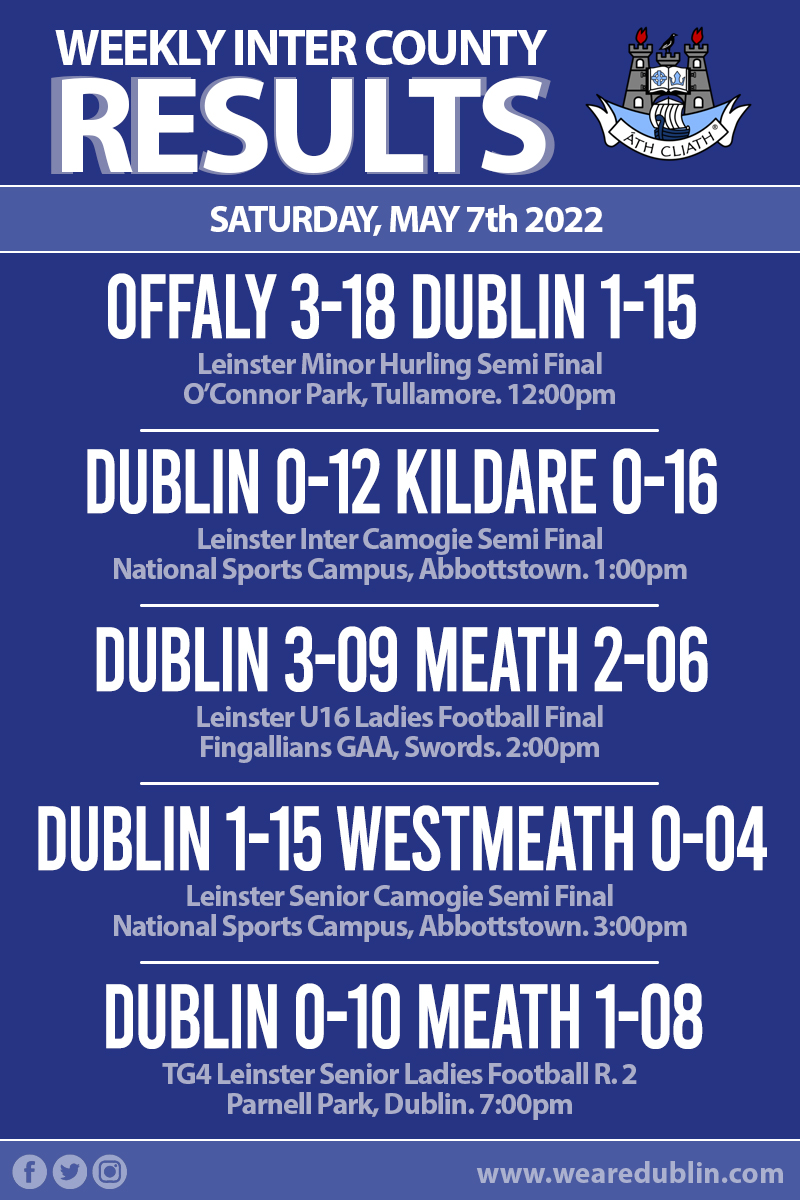 What a Saturday we had. The weather did us all a few favours in comparison to the last couple of weekends. And with five games played across the county we’ve plenty of results news to bring you to round everything up.

With great disappointment, Dublin’s journey in the Leinster Minor Hurling Championship came to an end yesterday in Tullamore. After successfully traversing the round robin phases of the competition, Dublin avoided a Quarter Final. A mix of results, losing to Wexford but beating Kilkenny, Dublin set up yesterday’s clash with Offaly.

Dublin had Offaly on the backfoot after eight minutes with a Ruan O’Connor goal. But goals from Adam Screeney and a Dan Ravenhill penalty fired the Faithful into a 2-11 to 1-9 lead at the break. Screeney had another goal quickly after the restart and Offaly controlled matters to seal a nine point – and a place in the decider.

Dublin should take confidence into the All Ireland series as they performed really well for a lot of the exchanges. The girls in blue lead 0-09 to 0-08 at half time. But Kildare came back at them on the restart and in a 14 minute spell hit 0-05 without reply giving them a strong advantage over the home side.

Jimmy Greville can now focus on this year’s All Ireland Championship which commences with a trip to Westmeath on May 28th.

A great day for Dublin’s U16 Ladies Football panel yesterday being crowned Leinster Champions in Fingallians. And it was a first provincial crown since 2017 as they defeated Meath by 6 points.

Leading by 2-05 to 0-03 at the break Dublin dominated proceedings, thanks to two goals from Eimear Kehoe and Karrie Rudden picking off some great points. Meath to their credit mounted a comeback in the second half and got back to within 3 scores thanks to a Laura Campion goal. But in the closing stages Sophia O’Brien netted Dublin’s third green flag to secure the victory.

The 1-15 to 0-04 victory was one of the most confident performances Dublin have displayed, and was an entertaining spectacle for everyone who travelled to Abbottstown yesterday afternoon. And it was day for young Castleknock star Aisling O’Neill to shine. It was a masterclass from O’Neill scoring 1-04 in the match. Hre 10th minute goal was the moment in the game Dublin established their hold on proceedings and never loosened their grip.

There’s no denying that since last year’s All Ireland Final, the appetite for a monster clash between Dublin and Meath has been satiated. And last night’s game between the near rivals was no different. For Meath, it was another psychological clout at the beggining of the Championship.

An Emma Duggan second half goal was the difference in a very tight contest. And it was a great start for Meath participating in their first Senior provincial championship since 2016.

At four a peice at the break, Meath opened up a f point lead over Dublin thanks to Stacey Grimes, Niamh O’Sullivan before Grimes and Vicki Wall linked up finding Duggan who shot the ball to the Dublin net.

After Wall pushed their lead to 6, Kate Sullivan returned two before Hannah Tyrrell reduced the gap further. Lyndsey Davey almost secured a goal for Dublin but could convert her shot successfully. Martha Byrne, Sinead Goldrick and Aoife Kane brought the gap to a single point but Meath kept possession at the important time to hang on for the victory.

That’s the results wrapped up for this week. Next week we have four fixtures across the week including the Leinster Minor Football Semi Final, The Leinter Senior Camogie Final, and of course more Senior Hurling and Football action in Leinster.