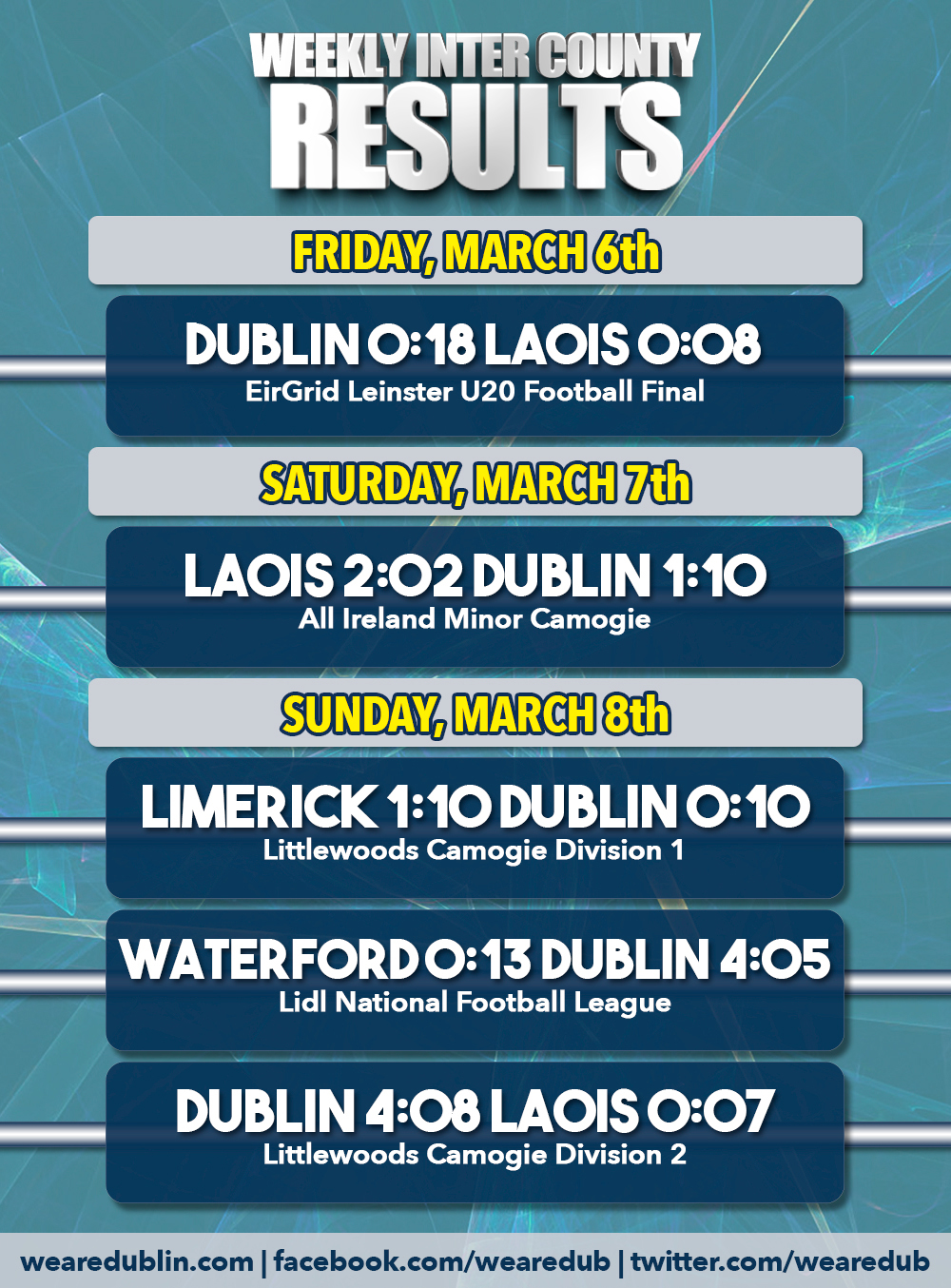 Another week over in the GAA Calendar. And with the weather slightly improved it was a busier week, with plenty of action. Let’s get you up to speed with weekly Inter County Results.

One result on Friday night but a huge one for Tom Gray and the Dublin U20 Footballers as they retained their Leinster title for the second consecutive year. In a repeat of last year’s decider Dublin again got the better of Laois. A slow start saw Dublin come from 0-03 down to finish the first half ahead by 0-11 to 0-05. And that trajectory continued after the break with the Dubs outscoring Laois by 0-07 to 0-03.

Ciaran Archer again lead the Dublin attack finding the target for seven of their 0-18 tally with corner forward Kieran McKeown grabbing four of his own. Dublin now face Tyrone in the EirGrid All Ireland Semi Final on St. Patrick’s Day, knowing a win will see them back in the Championship Final for the second year in a row.

Another round and another convincing win for Dublin’s Minor Camogie panel in the All Ireland A Championship. The conditions in Clonad weren’t the greatest but Dublin knuckled down. And despite leaking two soft goals, one in either half, the girls in blue came from 2-02 to 0-03 down to secure a 1-10 to 2-02 win, holding Laois to one goal in the second half.

Niamh Comerford scored 0-04 from vital frees, with Emily Browne getting their only goal and a point. Second half substitute Roisin Ní Chathasaigh bagged 0-03 with Meadhbh Hicks and Aisling Gannon also on target. The girls now play three consecutive weekends to finish the Round Robin competition. Away trips to Waterford and Tipperary ending at home against Wexford. One more win should all but guarantee them a knockout spot.

A busy day of action today with three Dublin teams involved. All ladies, appropriate for International Women’s Day. Our focus was at Fraher Field in Dungarvan as Mick Bohan’s Senior Football panel got back to winning ways with a 4-05 to 0-13 win over Waterford.

The win sees Dublin move four points clear of the relegation zone in Division 1 as they girls hit four goals to move past Waterford for the win. Siobhan Woods, Noelle Healy, Carla Rowe and Sinead Aherne were all on target as Dublin came from 0-10 to 2-02 behind at half time to finish with a four score win.

In Littlewoods Camogie League action both Dublin sides were out today. The Senior panel sadly suffered their third loss and now face a relegation game next weekend. Willie Braine’s side had a healthy 0-07 to 0-03 lead at half time but Limerick came back at Dublin after the break. And with the scores level on 0-09 a piece in the second half, Limerick struck a goal to put them in front and see out the game to win 1-10 to 0-10. Dublin will face Offaly in the play off next weekend.

Finally, Dublin’s Intermediate put in a great performance against Laois in Broombridge this afternoon to help their Division 2 cause. The girls were 2-05 to 0-02 up at the break and that form continued through the second half with the game finishing on a 4-08 to 0-07 scoreline. That should see Dublin avoid a relegation play off and keep their Division 2 status for the second year.

And that’s all for this round up of weekly Inter County results. Make sure to stay tuned next week for more action. We’ll have more Camogie action in the Senior and Minor competition. The U14, U16 and Minor ladies are all in action next weekend. And of course Dessie Farrell’s Senior Footballers are back in Croke Park to face Meath.