The Scores Are In From the Weekend. Here Are All This Weekend’s Inter County Results 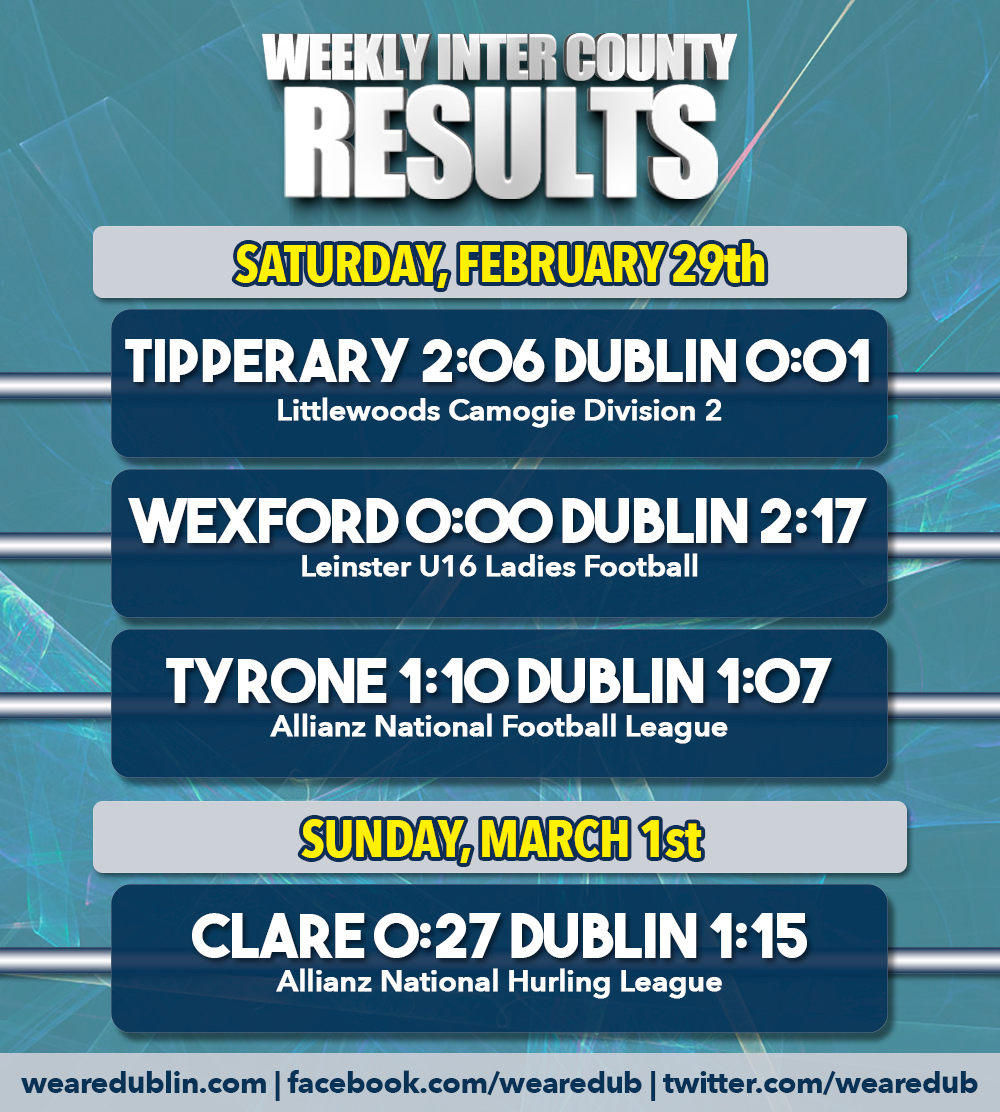 Can you believe it’s March already? The weather will hopefully be improving soon. Yesterday was absolutely awful, but we still got some games played. Here’s all the details.

Storm Jorge gripped the country yesterday with many games being postponed and in the case of at least two of the three games Dublin were involved in yesterday, they should never have been played.

Dublin’s Intermediate Camogie Panel travelled to MIC in Thurles for the second of their three round games in this year’s Little Camogie League. This game against Tipperary was originally set for Round 1 but bad weather had already postponed it. And yesterday, the game again should have been postponed. The conditions come throw in were unbelievable. High winds, driving rain and sleet. Visibility was minimal. But the game went ahead. And unfortunately for Dave Dunning’s panel it ended in a second league defeat. Tipperary recorded their second win in the competition on a score of 2-06 to 0-01.

Dublin’s U16 Ladies Football panel got off to winning ways in their Leinster Championship. A fruitful trip to Enniscorthy saw Dublin come away with a 2-17 to 0-00 win over Wexford. Next up for the young girls in blue is another away trip, this time to Westmeath.

And finally last night, again in awful conditions, Dessie Farrell’s Senior Footballers suffered their first League defeat at the hands of Tyrone. The game was nip and tuck throughout with Rory Brennan securing the points for Mickey Harte’s side with a very late goal. Full time score Tyrone 1-10 Dublin 1-07.

One game this afternoon and a must win for Dublin’s Senior Hurlers. But sadly it wasn’t to be for Mattie Kenny’s side despite a spirited performance. Clare came into today’s game unbeaten in four, and left unbeaten on a 0-27 to 1-15 scoreline. That puts Clare automatically into the Division 1 Semi Finals.

The men from the Banner County led by six points on two occasions in the first half, but Dublin managed to draw level at the break thanks for the most part to an Eamonn Dillon goal. But Clare would hit seven of the first eight points in the second half to take the game away from Dublin. The boys in blue got back within five points of Clare but the home side had already laid a solid foundation for the win.

And that’s all the Inter County Results for this week. Stay tuned to www.wearedublin.com for next week’s fixtures and more.