The round up of this week’s Inter County Results, two wins, one loss 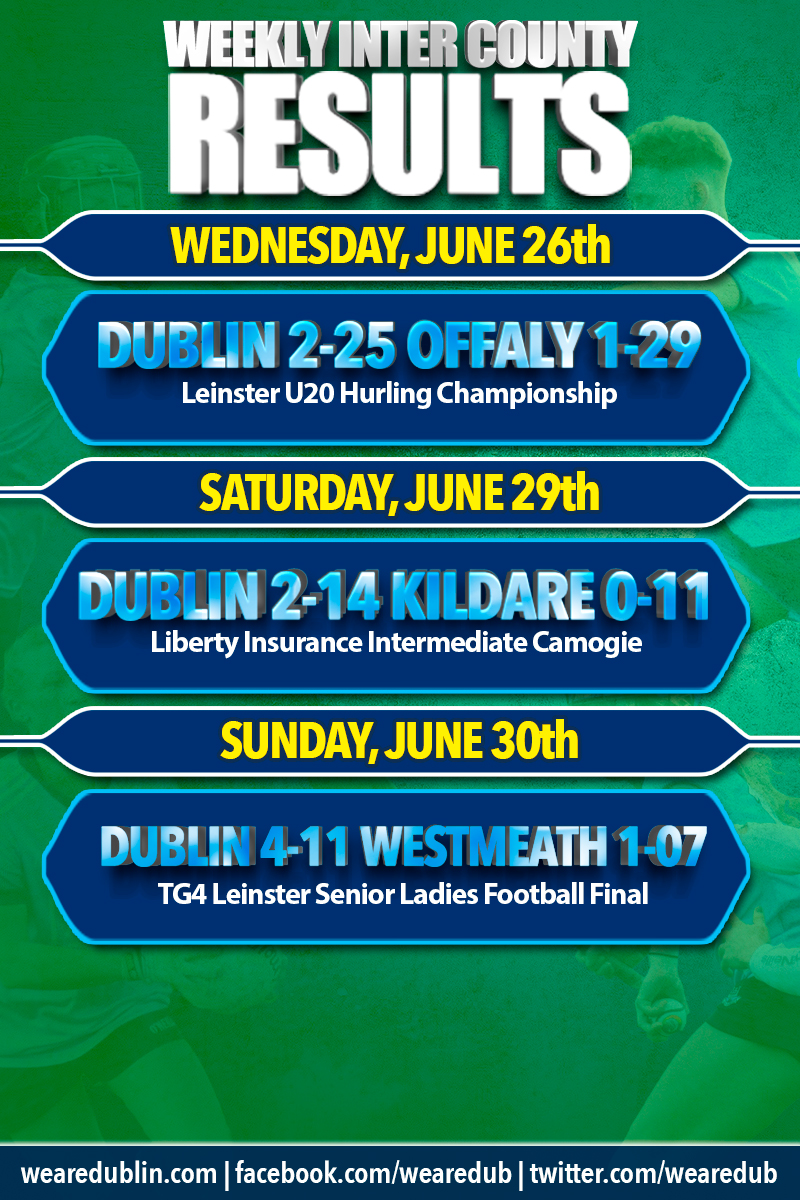 Another week over and more games to report. Dublin’s Senior Ladies Football panel successfully defended their Leinster title today, keeping it for the eight consecutive time. And Dublin’s Intermediate Camogie panel got their first All Ireland win yesterday.

Here’s all the details from this week.

An early exit for Dublin’s U20 Hurlers in this first ever Leinster Hurling Championship at this age bracket. But it took extra time to finally seperate them from Offaly who snatched the victory at the death as a John Murphy free converted from around the halfway line was all the faithful needed.

In a tough physical battle in Parnell Park, Dublin had clawed their way back from a seven point deficit to force the additional play time. With eight minutes remaining the Dubs were three clear.

Offaly, lead of course by Cathal Kiely’s free taking prowess had the stronger finish. They clawed back the three score deficit and Kiely had them in front four minutes into additional time. Derwin again stepped up when needed to square the game and send it to extra time.

Two excellent second half goals from live wire forward Gaby Couch propelled the Dublin Intermediate Camogie team to an first win at the grade in championship.

Gaby wasn’t the only star of the show as the win was built on a whole team effort full of excellent link play, movement, running off the shoulder and a huge work rate.

Kildare were now solely relying on the dead ball accuracy of Siobhan Hurley for scores, but Dublin had their own sharpshooter in the form of Cliodhna Nicolletti.

In the end Dublin’s skill and speed were too much for Kildare and the girls in blue ran out comfortable winners.

Dublin claimed their eighth TG4 Leinster senior title in a row, but the scoreline doesn’t do justice to Westmeath who only fell out of contention thanks to late goals from Niamh McEvoy and Nicole Owens at Netwatch Cullen Park.

Dublin recovered from the early loss of Sinead Aherne through injury to lead at half-time and Mick Bohan’s side were convincing winners after a powerful second-half display.

Oonagh Whyte’s two first half goals set the tone in a very  physical encounter. Westmeath gave as good as they got for the most part. but Dublin fitness again proved costly for their opponents.