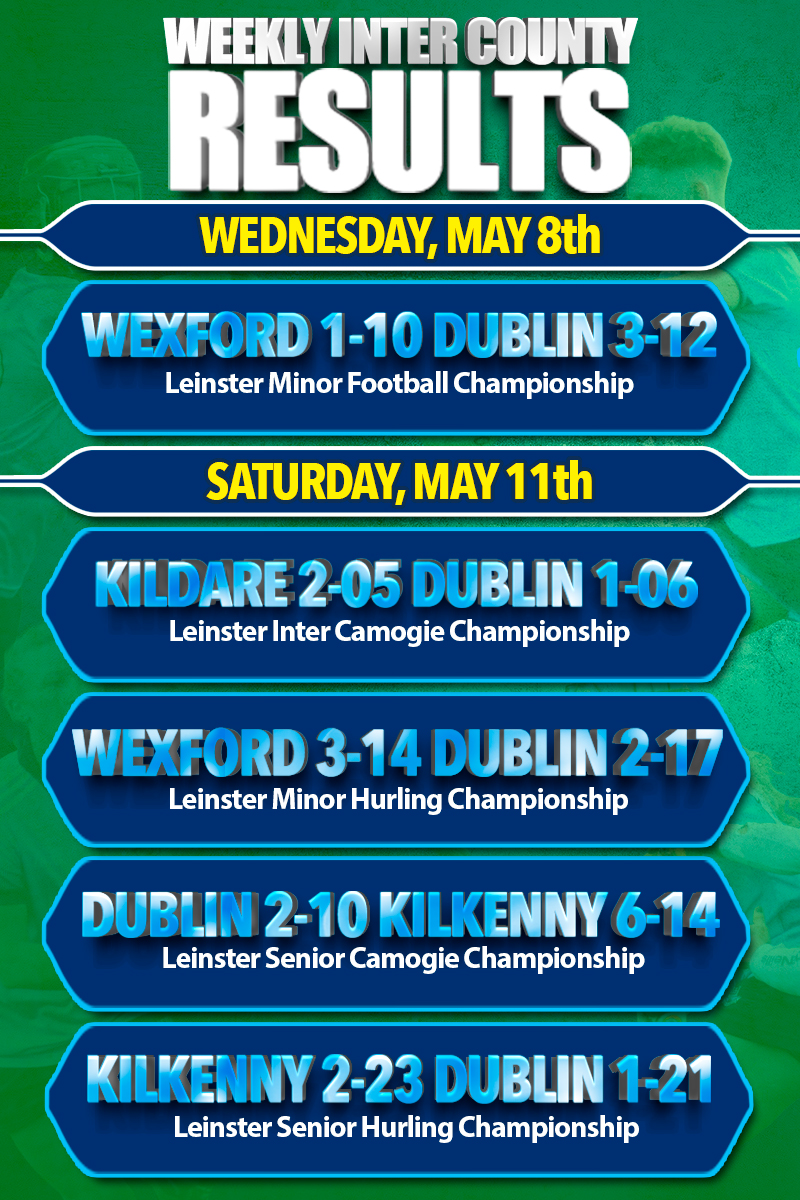 Five games, packed into two days. Three losses, one win and one draw. It sees both Dublin’s Senior and Intermediate Camogie panels out of Leinster competitions. Dublin’s Minor Footballers have another round to go in their provincial championship and are still in the hunt. The Minor Hurling panel are through to the Leinster Semi Final and still on course to retain their title. And the Senior Hurlers, despite losing yesterday, can dust themselves off and look forward to a home tie next weekend.

A couple of early second half goals changed the course of this Leinster Minor Football Round 2 clash as Dublin remain unbeaten in the competition this far.

Fionn Murray hit the target twice following the half time break to help his side to the win despite having to play the majority of the game with only 14 men. Forward Ryan O’Dwyer was dismissed in the 12th minute but Wexford never capitalised on the advantage of the extra man. On a comfortable 1-07 to 0-04 lead at half time. Immediately after the break, Murray hit two early goals yo make the claw back more difficult for their opponents.

This Wednesday, Dublin will aim for three consecutive wins to end the group of the competition as they head to O’Connor Park to face Offaly.

Dublin’s Intermediate Camogie panel would have hoped for a better outcome in their Leinster Championship Quarter Final yesterday, but sadly Kildare finished stronger to advance to the last four. Dublin lead at half time but couldn’t keep hold of the advantage. It’s now time for David Dunning to continue rebuilding and prepare for the teams All Ireland Championship run.

A loss, a win and a draw for the reigning Leinster Minor Hurling Champions, as Wexford fight back to tie with Dublin. The game stood at 3-14 to 1-14 in favour of Dublin, but with 10 minutes to go the crowd witnessed Wexford score 2-03 unanswered.

Eight points seperated the sides at half time with Dublin leading 2-10 to 0-08. But a battling Wexford had the gap closed to 0-04 by the start of the fourth quarter.From here through Wexford grabbed the game by the neck. AJ Redmond reeled off three frees and goals from Shiel and David Cantwell levelled the sides with the game entering injury time.

For Dublin, this result sees them through Tier 1 as Semi Finalists ahead of Wexford on score difference. They’ll be joined by Kilkenny, with Wexford and Offaly entering the Quarter Finals.

A clinical first half from Kilkenny which included four goals paved the way for today’s win with the girls from the Marble City building up a thirteen point lead by the half time break which gave Dublin a mountain to climb in the second half.

Two further goals in the second half made sure there would be no comeback for Frank Browne’s Dublin side who were second best today against a Kilkenny side that looked a little bit sharper throughout.

It’s back to the drawing board for Dublin boss Mattie Kenny, as yet another TJ Reid led masterclass inspired a Kilkenny comeback in the second half to consign Dublin to an opening day defeat in the Leinster Hurling Championship. Dublin’s first half performance was looking like they’d built on the performance they put in twelve months ago when the boys in blue fell short by two scores, leaving the win behind. But a dominant Kilkenny mowed a path through Dublin in the second half to finish five points clear.

With Kilkenny playing with a depleted panel, many thought this was Dublin’s perfect opportunity to registered a long awaited win over the cats. But it was the experience of Brian Cody and his panel that rolled with the punches and rode out the storm to turn the game over in their favour. Though Dublin should not be too deflated

DAVID HERITY MAKES ONE CHANGE TO THE TEAM TO FACE WATERFORD