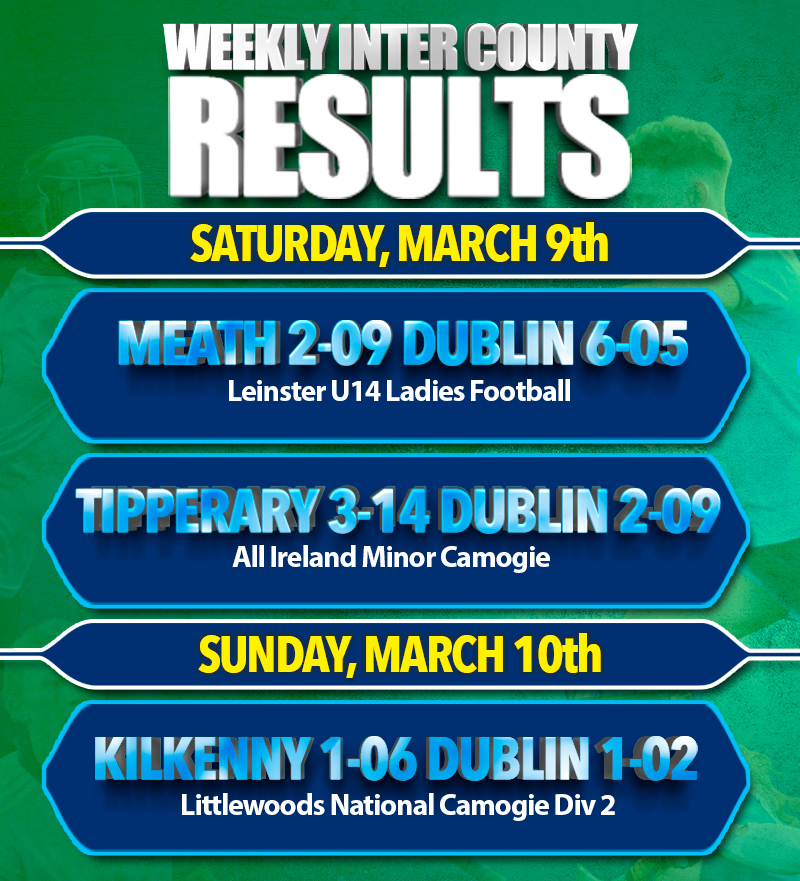 We round up this weekends Weekly Inter County Results

Another weekend has come to a close and hopefully most of us avoided the horrible weather. And after today’s National Hurling League results, Dublin will now face Tipperary in Thurles next weekend. Certainly a mouth watering fixture, and a repeat of last year’s quarter final with Tipperary the winners back then. A new year, a new manager and an enthusiastic panel. It has the makings of a great contest.

But let’s dig into the details from this weekends results.

Well the rivalry was rekindled again for another year, but Dublin were a goal machine in Dunganny, comfortably beating Meath in yesterday’s Leinster U14 Ladies Football opener. Leading 6-02 to 1-06 at half time gave the girls in blue some breathing space in the second. And while Meath registered 1-03 to Dublin 0-03 in the second phase, Dublin had done more than enough in the first half to secure the win.

Next weekend the girls will welcome Westmeath to hime turf for their next championship game.

Two goals inside the opening three minutes set Tipperary up for victory over Dublin this afternoon in the All Ireland Minor A Camogie Championship. That early blitz of goals threw Dublin out of their stride and it wasn’t till the midway point of the first half before Willie Braine’s side settled into the game.

Dublin dominated the second quarter of the half to get themselves back into the game and Niamh Comerford who is developing the habit of scoring goals at vital times in games raised a green flag just before the break.

But another early scoring blitz by Tipperary in the second half which included their third goal of the game left Dublin chasing the game and despite a late goal from Comerford her second of the game, Tipperary ran out deserving eight point winners.

Another week and a third league defeat for Dublin’s Intermediate Camogie panel, this time at the hands of Kilkenny. The girls lost narrowly to Antrim in their opener, and followed that with a loss on an away trip to Laois last week in horrible conditions.

Today’s loss sees Dublin stay at the bottom of the table and with one game to go against Derry, manager Shane Plowman will be concerned at the prospect of relegation following such a great 2018 league and Championship campaign.

Kilkenny held Dublin scoreless in the first half on 1-04 to 0-00 and added a couple more after the break before Alix Buckley opened Dublin’s account. Dublin did press on to score another 1-01 but it just wasn’t enough with Kilkenny finishing four scores ahead on a final score of 1-06 to 1-02.

And that’s this week. Make sure to stay tuned for next weekeend’s action. Dublin Senior man and Senior Ladies are in Allianz and Lidl league action on Saturday. The U14 ladies play their next Leinster Championship game. And of course the Dublin Senior Hurlers will travel to Thurles for the Allianz NHL Quarter Finals against Tipperary.