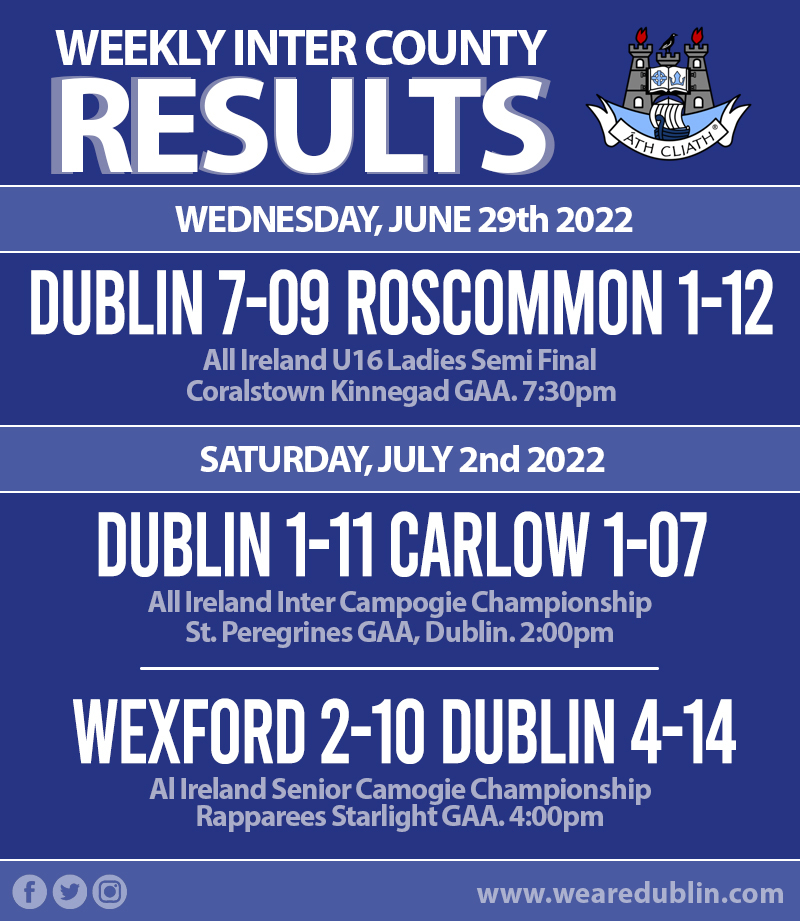 What a week we’ve had. We’ve seen our U16 Ladies Football panel advance to this year’s All Ireland final. And both our Intermediate and Senior Camogie panels have qualified for their respective Quarter Finals in the All Ireland Championships. Let’s get you up to speed on all the results.

A resounding 7-09 to 1-12 victory over Roscommon on Wednesday night sees Dublin’s U16 Ladies Football panel through to this year’s All Ireland decider. And they’ll be facing old foes Cork in that game next week.

With 3 points seperating the sides at half time, Dublin upped the anti on the restart to bag an additonal 4 goals. Joy Ralph, Elsa Kearney, Lucy Ahern, and sub-Kate O’Toole all raised the green flag for the dubs at the game in Coralstown, and the result sees Dublin back in an All Ireland Final for the first time since 2016. Back then they lost out to Kerry in the decider. And we go back as far as 2010 since teh young Dubs claimed the All Ireland title.

Let’s hope we’re celebrating an All Ireland win this Wednesday night in Clonard with the girls.

JImmy Greville’s Intermediate Camogie panel were the first of the adult teams celebrating yesterday after securing a 1-11 to 1-07 win over Carlow to land the third spot in the Group 1 table. This sees them advance to the competitions Quarter Finals next weekend. They’ll now face Derry in the hope of a Semi Final slot.

Dublin’s opening round defeat to Westmeath was overturned this week, giving them a lifeline in the Inter Championship. And yesterday’s win over Carlow saw them capitalise on that outcome to take the last qualifying slot in the knockout stages with Kerry beating them in second place on score difference and head to head.

Greville’s girls will travel to O’Moore Park in Portlaoise next saturday to face Derry. They’ve absolutely nothing to lose for their chance to reach the last four.

Two drawn results in this year’s Senior Championship left Dublin with some work to do yesterday as they faced Wexford in their final round game. And Adrian O’Sullivan’s panel certainly left everything on the pitch at Raparees Starlight’s, with a resounding 4-14 to 2-10 victory, paving the way for a Quarter Final showdown with Kilkenny in 2 weeks at Semple Stadium.

Trailing by 2-03 to 0-06 at half time after a slow start, the Dubs came out of the dressing room with the greatest intent. Ashling Maher dropped the ball into the net from a long range free just past the half way line for the first of four second half goals. Emma Flanagan pounced on an error with a Wexford puck out to score second goal.

Issy Davis and Aisling O’Neill created a massive headache for the Wexford defence with their interplay, and Davis confidently found the net twice putting the game out of Wexford’s reach and give Dublin a Quarter Final showdown with Kilkenny, who they faced in this year’s Leinster decider.

There’s plenty more action this week as the U16 Ladies Football panel challenge for the All Ireland title on Wednesday. On Saturday our Inter Camogie Panel and Senior Ladies Football Panel are in All Ireland Quarter Final action. On Sunday the U16 Camogie Panel play their final All Ireland round game. And Dublin’s Senior Footballers go head to head with Kerry in this year’s All Ireland Semi Final in Croke Park. Join us throughout the week for team news, results and updates on all games.

Restructuring of the 2020 Liberty Insurance All Ireland Intermediate and Premier...