Tonnes of inter county action to get you excited about this week. 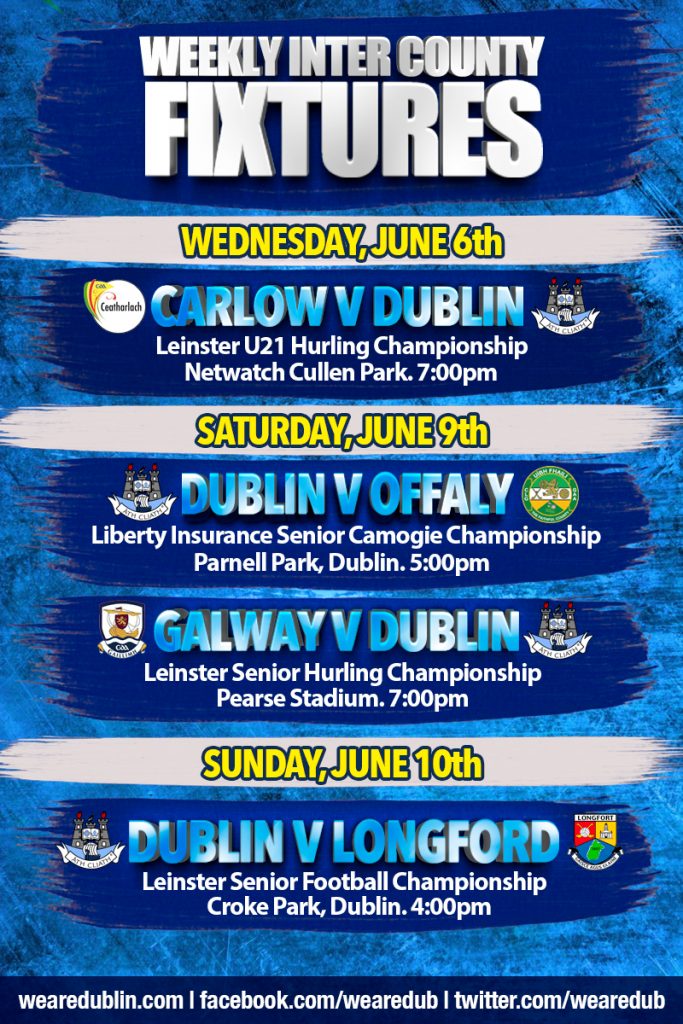 There’s a cracking week of inter county fixtures in store for Dublin fans with four massively important games being contested between tomorrow and Sunday in Football, Camogie and Hurling.

Dublin’s U21 hurlers will make the trip to Netwatch Cullen Park tomorrow night to face Carlow in Round 2 of this year’s Leinster Competition. The boys in blue were 4-16 to 1-10 winners over Laois in their first round and if they’re successful tomorrow they will qualify to face Westmeath in the Quarter Finals on June 13th. Throw in time tomorrow in Carlow is 7:00pm

David Herity’s Senior Camogie Panel get their All Ireland Championship underway this Saturday evening with a home tie against Offaly. The girls will play five round games in the competition and after Saturday they’ll be on the road for their next three games, against Cork, Meath and Wexford, before finishing with a home fixture against Tipperary. Last year they reached an All Ireland Semi Final were they fell to Kilkenny, so they’ll be out to match or better that this year. Throw in at Parnell Park is 5:00pm.

We’ve reached the final round in this year’s provincial Senior Hurling Championship, and after the weekend’s victory over Offaly, Dublin have secured their championship status for 2019. That said they still have to travel to Pearse Stadium this Saturday evening to take on the reigning All Ireland Champions Galway for one more game. the Dubs ran Kilkenny and Wexford very close and it will be interesting to see the outcome of this weekend’s game. Throw in is 7:00pm in Salthill.

It’s back to Croke Park for Jim Gavin’s Senior Football panel in  the hope of creating more memories for the faithful fans as the Dubs take on Longford in the Semi Finals of the Delaney Cup competition. Dublin are on staying course to secure their eight consecutive provincial title, but they’ll have to beat Longford first.

So there you have it. Some fantastic games to whet the appetite. Make sure you get out there and support all teams involved.