Camogie, Hurling and Football action ahead of us this Saturday and Sunday in the weekly inter county fixtures 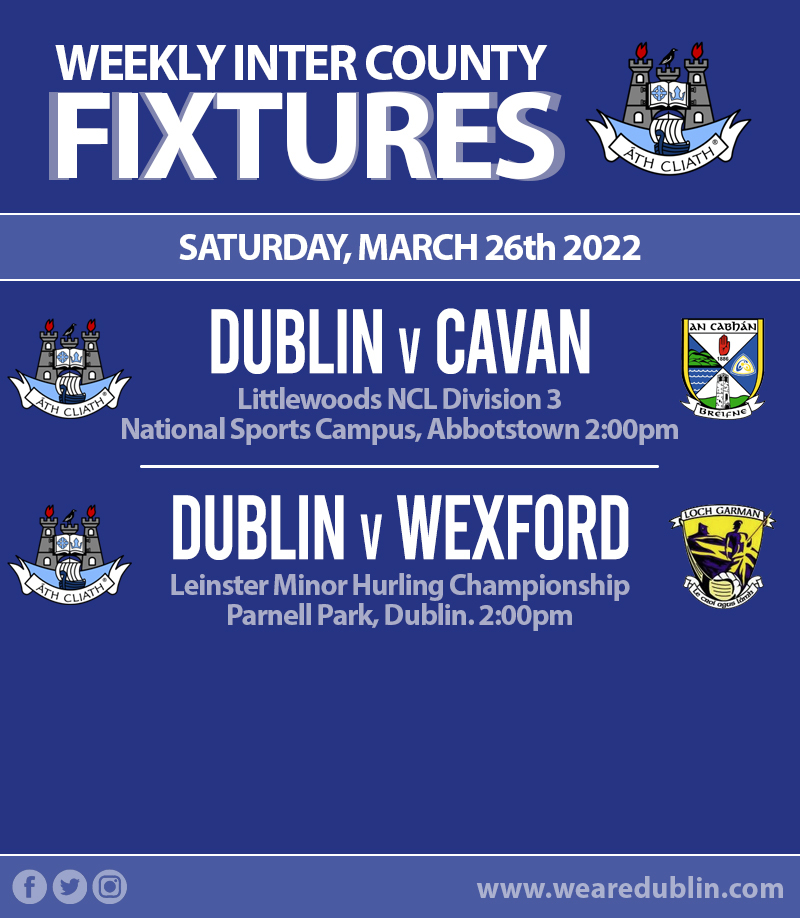 We’ve another packed weekend of fixtures on Saturday and Sunday, with two competitions starting and two coming to a close. Certainly an interest few days ahead.

Jimmy Greville’s Intermediate Camogie panel reach their final round game in this year’s Littlewoods Camogie League Division 3 campaign. There’s a check so far in each column as Dublin have won one, drawn one, and lost one as they look towards Cavan who are sitting top of the Group 2 table.

Dublin currently sit in third position on 4 points. Below them are Antrim and Carlow who square off against each other this weekend. With Cavan unbeaten so far it’s going to be a tough encounter for Dublin, but the girls can enjoy the game knowing their division status is secured.

After the weekend the girls have a month to prepare for the Leinster Championship, facing Carlow in the Quarter Finals.

And there’s a twist in the tail as the young Dubs will face Wexford, the team that put them out of last year’s competition at the Semi Final stage. So there’s more to this than it just being the opening round.

Today, the Dublin Minor Panel was announced, with Cian Moran, Ciarán Donovan, Conor Brennan and Joey Kinnane named, all of whom were also involved with the panel last year. And that means there will be plenty of new talent on display at Dublin GAA Headquarters. 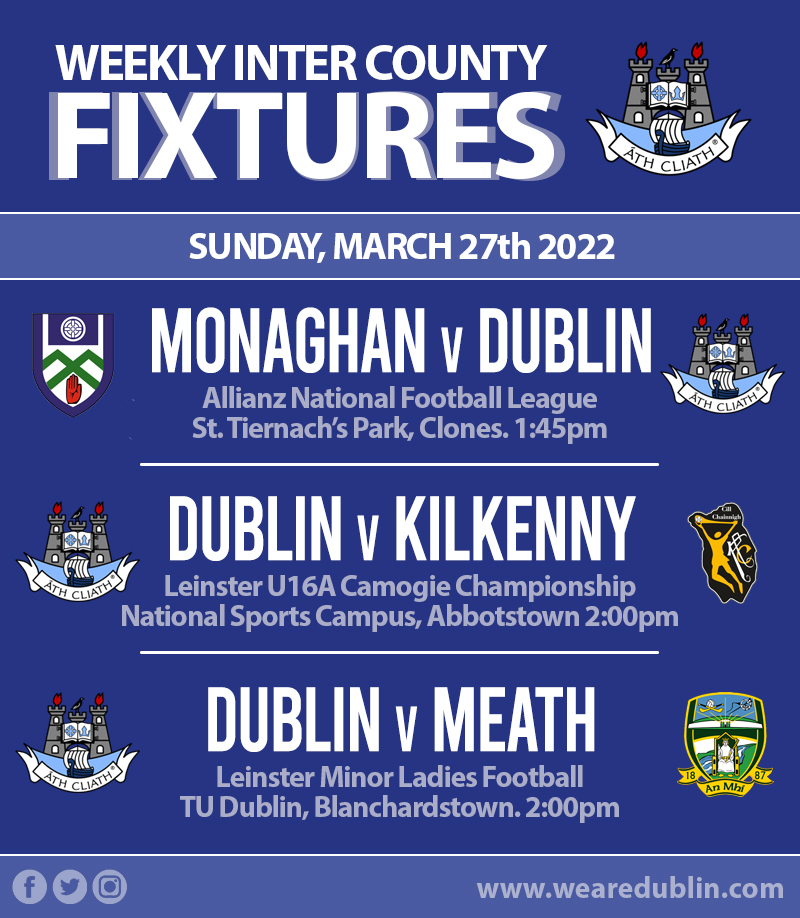 No one would have believed at the beginning of the year that Dublin’s Division 1 safety would boil down to the final round game against Monaghan away from home. But that’s the fate of Dessie Farrell’s men this weekend. It’ll be hard enough going to Clones to get a win, but they’ll also be looking at the games incolving Kildare, Tyrone and Donegal.

Six points would be a nice number to finish on for Dublin after four false starts in this league campaign. But they’ve found their group in the last two games, beating Tyrone in Omagh and Donegal last weekend in Croke Park in a impressive display.

Kerry and Mayo are expected to beat Tyrone and Kildare, but nothing in this league is guaranteed as we’ve come to understand the hard way this year. Elsewhere it’s too hard to call the game between Donegal and Armagh. But for Dublin, the first task is to get out of Clones with a win as it’s as important to Monaghan to win too.

For the second time this weekend Abbottstown will host a Dublin Camogie home game. And on Sunday it’s the turn of the U16’s to get their provincial campaign up and running.

And with only an All Ireland competition last year, it’s a great chance for the girls at this grade to get some game time in. And they’ll face Kilkenny, who they faced in the final round of the All Ireland last year. In that game they fought a hard contest but were beaten by Kilkenny on a 2-11 to 2-06 scoreline. They’ll want to out in a good solid performance on Sunday to get the competition off to the best start.

After this weekend, Dublin will travel to Offaly for Round 2 before their final round game against Wexford. We’re hoping we get to see plenty of this panel this year.

Another competition beginning this weekend is the Leinster Minor Ladies Football Championship. And it’s a welcome return after a huge break due to COVID restrictions. First up for Dublin are rivals Meath, arriving at TU Dublin’s Blanchardstown on Sunday for the opening round.

In the three phase Round Robin games, Dublin will follow their opener against Meath with a battle against Laois on Easter Monday, finishing with a final round matchup against Kildare near the end of May.

There’s some serious experisnce in the backroom team as Dublin are once again managed by Fintan O’Curry, who ten years ago guided Dublin to their second Minor All Ireland title.

And there you have it. Four games over Saturday and Sunday. We’ll have more game news and team announcements over the coming days. Stay tuned.