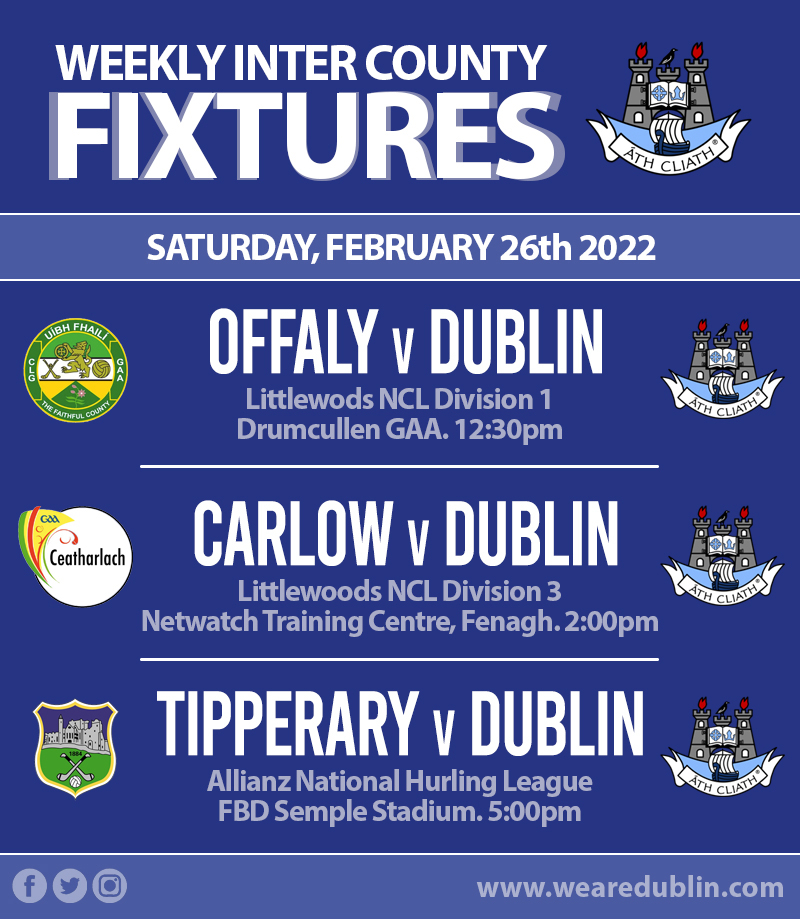 Dublin supporters will be making road trips this weekend as four of the five Inter County games are away from home. Both Dublin’s Senior and Intermediate Camogie sides are travelling on Saturday along with the Dublin Senior Hurlers. And on Sunday the Dublin Senior Footballers are down the road in Newbridge with the Minor Camogie Panel at home.

Adrian O’Sullivan will have dusted his Senior Camogie panel off after their opening day defeat to All Ireland Champions Galway last week. With six points registered and a concession of 1-15 in that game there’s some work to do. For Offaly, they come into this weekend’s game off the back of a 4-21 to 1-05 defeat at the hands of Tipperary in Bansha. So the pressure will be on both sides to bank a first win.

With Tipperary and Down still on Dublin’s fixtures list, there’s still time to make a dent in this League campaign, but they’ll want to come away from Drumcullen with points on the board.

Only 2 points seperated Dublin and Antrim in Roger Casement GAC last weekend, but sadly it was Dublin who came away defeated. The 1-09 to 1-07 scoreline was a good reflection of the game with Aoibhe Dillon bagging Dublin’s goal after her long range effort dropped below the crossbar and into the net. But Antrim’s two score lead got them through the second half with both sides scoring 0-05 each.

Carlow come into the weekend’s game cold as their opener against Armagh was postponed and rescheduled for March 5th. But they’ll see the tie against Dublin as their opportunity to get up and running at home.

Mattie Kenny’s Senior Hurlers have been digging deep since winning the Walsh Cup. And after a dogged draw against Waterford in the opening round of the National Hurling League they took to the road and saw off a tough challenge from Antrim in Corrigan Park two weeks ago. That 2-19 to 2-15 return will set the boys in blue up nicely as they head for Thurles on Saturday.

Tipperary are two for two and will be tough opponents for Dublin. They followed their opening 0-21 to 1-14 win over Laois with a narrow 1-19 to 1-18 win over Kilkenny in the last round. The Premier County are top of the Group B table but Dublin are not far behind, sharing the second spot with Waterford. This will be a real slogger. 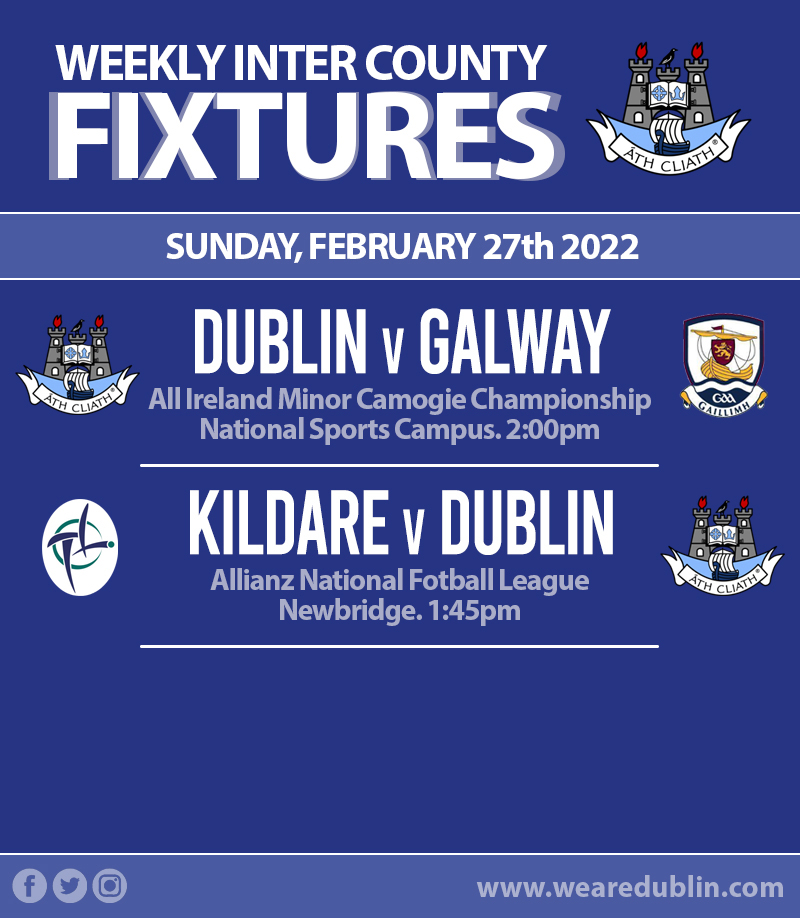 Disappointment for John O’Connell as they suffered defeat at the hands of Cork in their opening round of this year’s All Ireland Championship. But they’ve a chance to atone this weekend when they welcome Galway to Abbotstown this Sunday.

The 2-15 to 2-05 scoreline has no reflection on how hungry this group of players are. When Dublin faced Galway in the competition last year, only 1 score seperated the sides with Galway shading the win by 3-09 to 1-14. Galway also lost to Cork in their opener so it’s all to play for this Sunday with a knockout slot up for grabs.

It’s the Round 4 fixtures in this year’s National Football League, and the Dublin Senior Footballers are still in search of their first win. Three losses to Armagh, Kerry and Mayo sees Dessie Farrell’s men at the bottom of the Division 1 table. Kildare are sitting just above them having secured a draw against Kerry in the opening round.

The Lillies have been on the road since that fixture. A 2-11 to 1-09 loss the Donegal in Round 2 was followed up by a closer 2-07 to 0-12 loss against All Ireland Champions Tyrone in the last round. The task for both sides now is to secure some points and avoid the dreaded relegation battle as the fixtures pass the halfway mark. Can Dublin secure a crucial win to save their league campaign?

Stay tuned over the weekend for more news on all these games along with team announcements.