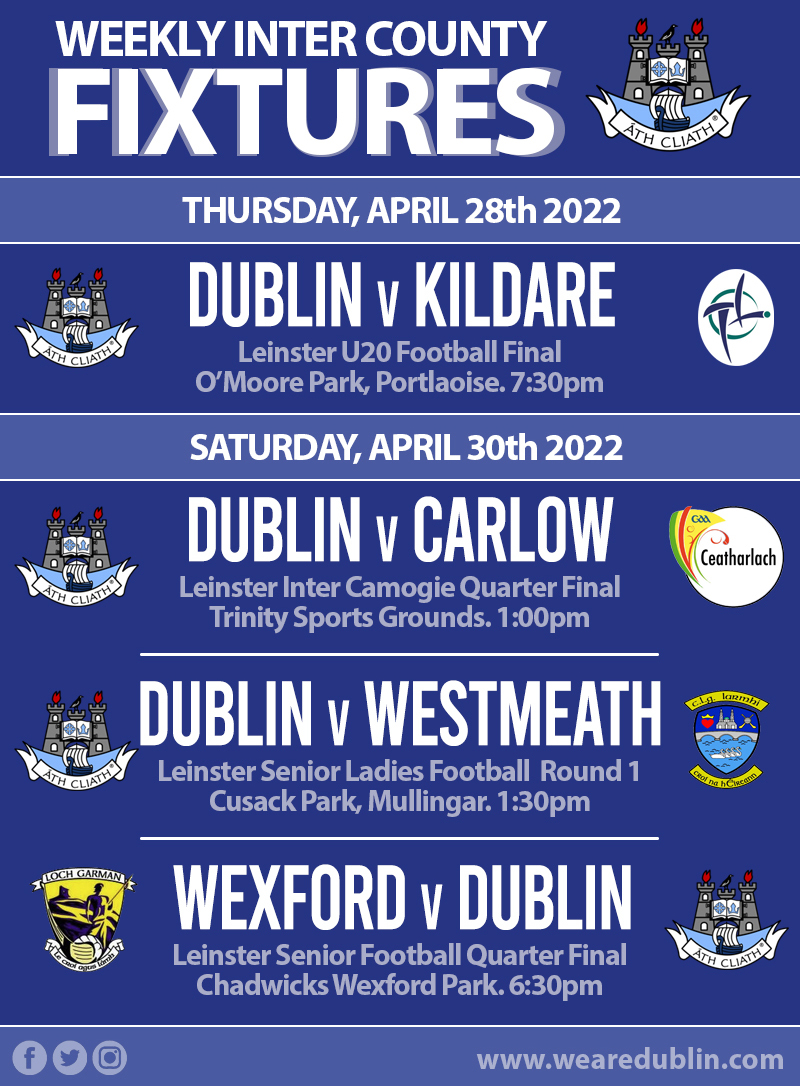 We’re in for a treat this May Bank Holiday weekend, despite refusing to believe it’s nearly May already. But the fixtures will come think and fast over the coming weeks as all provincial competitions will be in full swing. Seven fixtures in total between tomorrow and the Bank Holiday Monday. So let not waste any more time.

They lost the provincial U20 crown to Offaly last year, but Dublin are back in the Leinster football Final for a ninth consecutive time in the hope of reclaiming the title. An initial scare in the early stages of their Quarter Final against Westmeath saw the Dubs dig deep and outplay their opponents in the second half to eventually win by 1-15 to 1-20, setting up a last four clash with rivals Meath.

That fixture, played out in Parnell Park last week went according to plan with Dublin making easy work of their opponents to run out 4-12 to 1-14 winners. They’ll be expecting a tougher challenge this week as they face Kildare. The Lillies come into this game having beaten last years Leinster and All Ireland Champions Offaly by 2-11 to 0-15.

This has the makings of a fantastic Leinster decider.

Having recorded one win, one draw and one loss in this years Littlewoods National Camogie League, Dublin’s Intermediate Camogie panel are poised and ready to start their championship journey. And no better way to start than on home soil.

The girls in blue compete in a Quarter Final this weekend against Carlow, who they’ve already met in league action. Back in February they travelled to Carlow’s COE in Fenagh and came away with a 3-07 to 0-07 victory, and it would be their only win in the competition. Carlow suffered 3 losses finishing bottom of the Division 3 table.

A win for either side on saturday will set up a Semi Final with Kildare the following weekend. Something Dublin would relish.

After a stunning finish to the Lidl National League which came to a premature end in the Semi Finals, Dublin’s Senior Ladies are back in action, and back on the path to the Leinster Senior Ladies Football Championship.

With the rise of Meath over the last few years, and with the absence of the provincial competition combined, it makes the return of this competition. Dublin, All Ireland Champions Meath and Westmeath will contest the Senior Championship. And it will be Westmeath and Dublin who get the action undersay this weekend. These sides have been no stranger to each other contesting many Leinster Finals against each other over the years.

Mick Bohan’s side will want to leave behind a disappointing League Semi Final and put all their focus on Saturday and the Championship season ahead.

This Saturday evening, Dublin supporters can finally league a disappointing Football League Campaign behind and the thoughts of Division 2 football next year. This will be a chance to see where Dessie Farrell and the Dublin Senior Footballers are.

After being knocked out at the Semi Final stage of last year’s All Ireland, Dublin have struggled to find consistency in the National League, and found themselves relegated on the final day following defeat at the hands of Monaghan. But expectations will still be high on Dublin retaining the Leinster title.

Their Quarter Final opponents are Wexford who beat Offaly in a qualifier by 1-15 to 1-12. And Dublin need to get out of the traps here and rebuild that confidence. There’ll be a great traveling support as always down in Wexford. Let’s hope they travel home with a win under their belts. 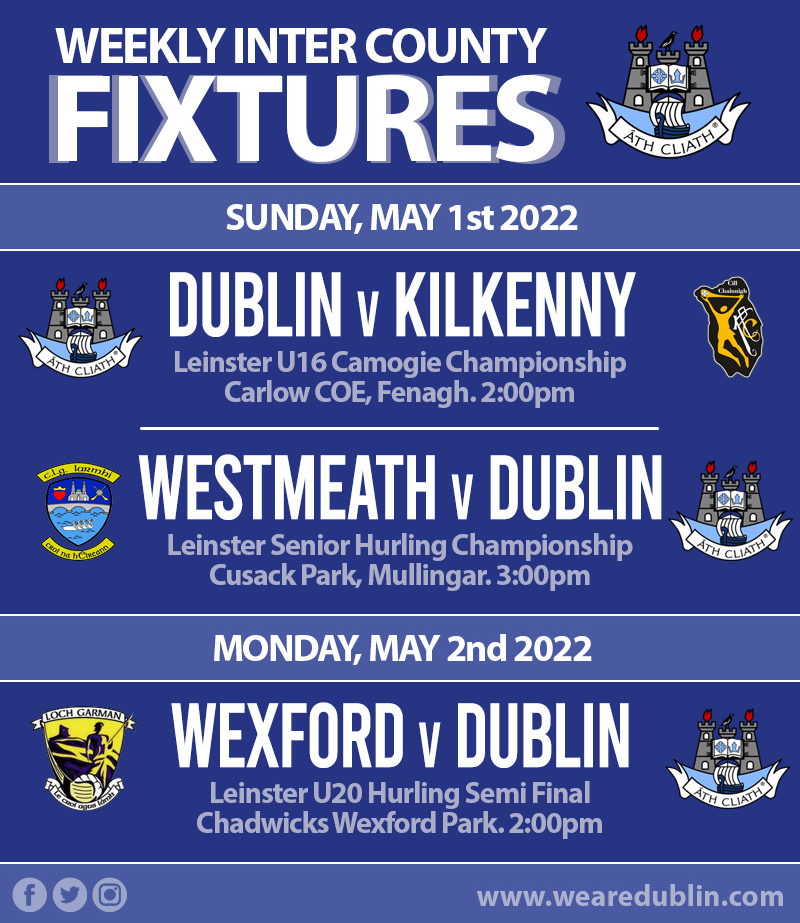 Dublin U16 Camogie manager Niall Daly will have had this game in his sites from the final whistle of the opening Round of the competition. In that game Dublin were beaten by Kilkenny and beaten well. But that doesn’t tell the full story.

The U16’s had not been together as a team for long, and if anything the Round 1 defeat thought Daly more than enough to take on the road to Birr and return with a 2-08 to 0-06 victory against Offaly.

Their third round game was a tough encounter but Dublin were victorious over Wexford by 0-10 to 0-08 to set up a rematch against Kilkenny. And if anything Dublin have grown exponentially since the opener.

Sunday’s game will be a tough encounter, but Dublin will head to Carlow with their head’s held high.

Mattie Kenny will go to Mullingar this Sunday knowing a win will put them in a solid position in this year’s Leinster Hurling Championship. Two hard fought wins over Laois and Wexford has put Dublin level after 2 games with Kilkenny in the table.

Westmeath have lost to Galway and Kilkenny so far, meaning this game is of as much importance to them as it is for the Dubs. For Dublin, a win before facing Kilkenny and Galway would be a great place to be.

After some solid performances in the league against Waterford, Laois and Tipperary, Kilkenny schooled them at Parnell Park. But Dublin have rebuilt momentum again since that game and will use this weekend’s game as further preparation for the home stretch.

A short competition this one for Dublin’s U20 Hurlers, but an important one. The young Dubs head to Wexford on Bank Holiday Monday for their Leinster Semi Final fixture.

Dublin and Wexford are in the last four along with Kilkenny and Galway on the other side of the draw.

Hurling fans will remember a busy schedule for the U20 hurlers last year. Due to COVID restrictions the year before both the 2020 and 2021 competitions were played back to back. Dublin were victorious over Galway to claim the 2020 title, and shortly after lost to Cork in the All Ireland Series. 10 days later they were facing and beating Offaly to qualify for the 2022 Leinster Final.

The dream of back to back provincial titles ended with Galway victorious by 2-15 to 0-15 in Portlaoise. But next Monday Dublin go again.