Two big Inter County fixtures ahead this week, with an All Ireland title at stake as early as tomorrow night 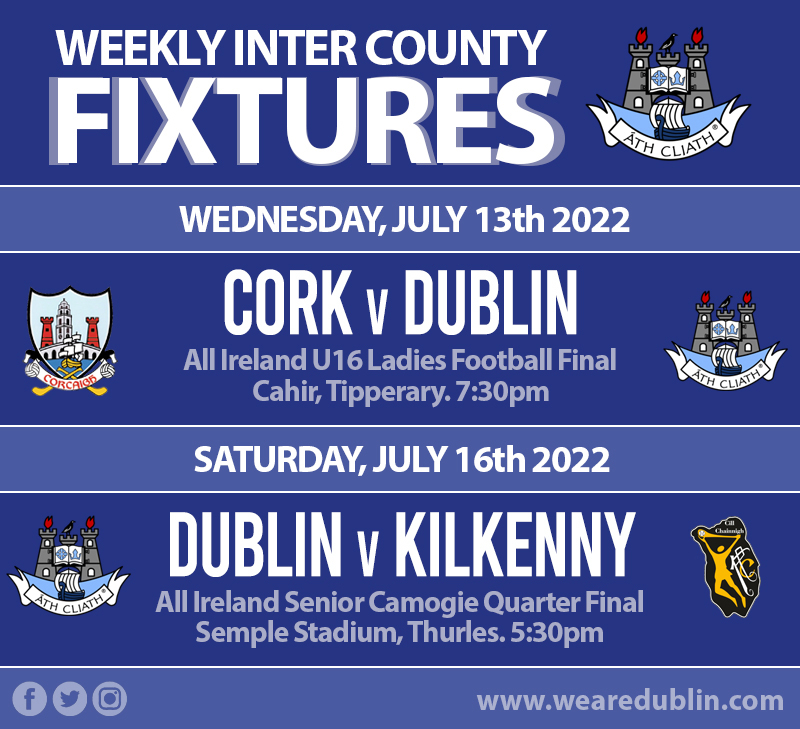 We’re literally coming to the end of the season, with a much quieter week of fixtures ahead. We’ve an All Ireland Final to enjoy tomorrow night. And we’ve the beginning of the knock out stages of the Senior Camogie Championship this Saturday. So let’s get you all the details on these two fixtures.

Dublin’s U16 Ladies Football Panel have the opportunity to claim an All Ireland title tomorrow night as they go head to head with Cork in Cahir. And it’s expected to be a close knit affair between these rivals.

Their Semi Final win over Roscommon saw Dublin bridge a six year gap having last appeared in the decider back in 2016 losing out to Kerry on that occasion. The Capital last took home the U16 crown back in 2010 having come out on the wrong side of results to Cork in the 2013 and 2014 finals.

The 7-09 to 1-12 win over the Rossies at the beginning of the month doesn’t do justice to how tight the proceedings were. Dublin had a 3-04 to 1-07 advantage at the half time break. So Roscommon were by no means out of the tie with only a score between them.

A 4-05 second half haul however put paid to Roscommon challenging for the spot in the decider with Dublin taking the space.

Adrian O’Sullivan’s Senior Camogie panel have a chance to wreap revenge on Kilkenny who comfortably beat the Dubs to lift the Leinster Senior title. But this game is also the only route to this year’s All Ireland Senior Semi Final.

Dublin come into this weekend’s match up following their most polished performance of the season this year. They landed a 4-14 to 2-10 victory over Wexford in their final round robin clash. And it showed an intent and signs of a shift in attitude that will be vital if they are to challenge the Leinster Champions on Saturday.

In their five round games, Dublin were unfortunate to record a loss to Cork, and will be disappointed to have only secured draws against Tipperary and Clare. But wins over Waterford and Wexford saw them finish in third position in the Group 1 table. If they can score a result against Killkenny at the weekend it would be monumental for O’Sullivan and his panel.

And that’s this week’s fixtures wrapped up. Stay tuned during the week as we’ll bring you news on these fixtures along with teams news. And of course anything else that comes across the desk.