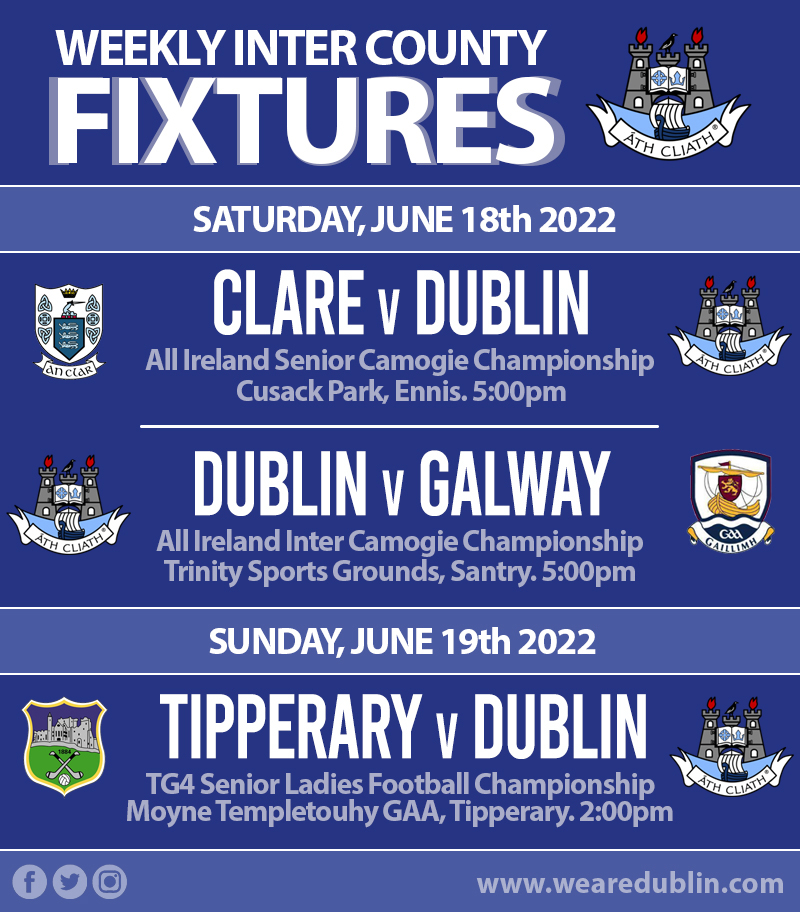 As we look forward to the weekend, both of Dublin’s Adult Camogie Panels and the Dublin Senior Ladies Football panel all look to play out their penultimate fixtures in this year’s repective All Ireland Round Robin series. The Glen Dimplex All Ireland Championships will be the focus on Saturday. And on Sunday Mick Bohan’s Senior Panel take a road trip in Round 2 of the TG4 Senior Football Championship. Let’s get into the details of all three fixtures.

Adrian O’Sullivan’s Senior Camogie Panel will have been both pleased and disappointed by their recent defeat to Cork in the last round of the Championship. Dublin won their opener against Waterford and drew in Round 2 against Tipperary. And they came out of the traps the girls from the rebel county. At half time, after a blistering display Dublin were in full control. Many of the spectators on hand believed a victory was on the cards.

Cork had other ideas however and as we know can never be written off. Their second half performance was as dominant as we’ve seen in a long time. They nullified Dublin’s attack and blitzed the scoreboard to hand the Dubs their first loss in teh competition.

On Saturday there is another opportunity for Dublin to get points in the Group 1 Table. Only 2 points adrift of the top 2, they travel to Meelick to face Clare. The Banner Ladies have only registered one draw in three games. Losses to Cork and Wexford followed their 0-10 a piece tie with Tipp in Round 1. So they’ll also be hoping for a change in fortune.

If Dublin can get anything from either of their remaining two gamesm they’ll remain in the hunt for a Quarter Final berth.

At the same time in Santry, Jimmy Greville wil be attempting to pick up the pieces after a one point defeat to Kerry on the road last weekend. The 0-11 to 1-07 was Dublin’s second defeat in three games. And it won’t have been the way Greville would have wanted to follow the sides 1-14 to 1-10 win over Laois in the previous round.

On Saturday they face the unenviable task of facing an unbeaten Galway side who make the trip up to the capital for the game. They’ve had comfortable wins over Laois, Carlow and Westmeath to date, and there’s no doubt there will be no plans on taking their foot off the gas this weekend.

Dublin currently sit above Laois and Carlow in the Group 1 table, and to avoid a relegation battle they’ll be looking for a result either this weekend or next weekend when they entertain Carlow in their final round game.

Carla Rowe made a welcome return to the Dublin Senior ranks this past weekend in the first of three round robin fixtures in this year TG4 Senior Championship. And no better place to make that return than in her own front yard at Clann Mhuire GAA Club.

The North County Dublin star recorded 2-03 to help Mick Bohan’s side to a comprehensive 5-14 to 2-04 win over Cavan. And if they can add a second win this weekend, it leaves the final game as a decider to what order the top 2 finish, should Mayo beat Cavan.

Meelick GAA will act as Tipperary’s home ground when Dublin make the trip on Sunday. They come into the game after losing their opener to Mayo by 1-16 to 1-06 last weekend putting the pressure on for a performance.

It’s expected that Dublin and Mayo will come out on top in their respective fixture, but in any Championship, nothing can be taken for granted.

And that’s all the details for the three fixtures being played out over Saturday and Sunday. We’ll have more news along with team details before the weekend so make sure to stay tuned.