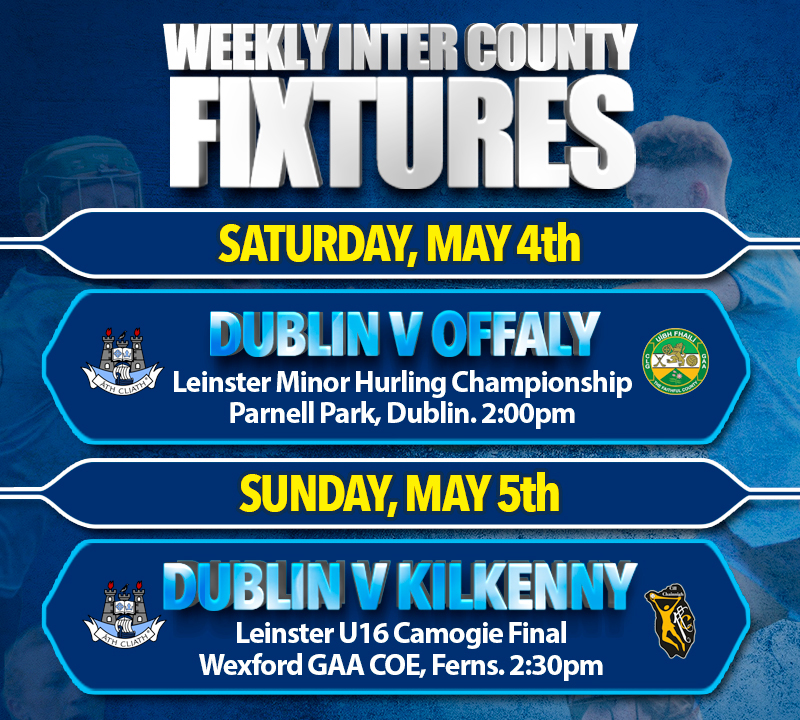 Coming off a weekend with two losses, we look forward to the May Bank Holiday Weekend and a couple of Leinster Championship games to get excited about. Last weekend Dublin’s U16 Ladies Football panel were beaten by old foes Meath in the Leinster Final. And on the same Kilkenny did a snatch and grab with a late point to beat Dublin in the opening round of the Leinster Minor Hurling Championship.

A quick turnaround will see Dublin head back to Parnell Park to welcome Offaly in Round 2 of this year Minor Provincial Hurling competition. After suffering a narrow defeat on Saturday last, Mike Connolly’s men will be targeting Offaly to get back on track immediately. Their goal will still be a semi final slot to avoid the extra quarter final game, but they’ll need to be placed at least second in Tier 1 for that to happen.

Dublin played well in bad conditions at the weekend and had lead Kilkenny at half time by 2-05 to o-07, but the couldn’t stop Kilkenny’s Billy Drennan scoring 0-11 (8f, 1 ’65). But what is positive is the goal threat from Luke Swan still prevalent in Dublin’s attack, along with Ben McSweeney.

Throw in this Saturday in Parnell Park is 2:00pm

A repeat of last year’s Leinster U16 Camogie Final, as Dublin and Kilkenny do it all again. Back then Kilkenny were 3-12 to 0-10 winners to clinch the title. But Dublin may have other ideas this time around. The skill and talent been shown in Dublin at this level is better than it’s ever been. And that’s evident in the three fantastic performances the girls have put in during the Round Robin phase of the competition.

In the opening round, Dublin made easy work of Offaly on home spoil. The 3-16 to 0-04 final score was the marker laid down for the other opponents to come in the competition as the girls played their first competitive game together. In Round 2 they met Kilkenny. In Round 2 twelve months ago Kilkenny left St. Lachtains the winners by a 0-02 margin. This time around O’Toole Park was the venue and Dublin showed just how much this competition means to the hold Kilkenny to a draw with the score at the whistle at 2-11 to 1-14.

In their final round the girls took to the road to Coolgreany to take on Wexford. With a win on their minds they completed the job, and leaving Wexford victorious by 1-18 to 2-06.

This side believe they can win this competition, and who’s to doubt them. Throw in is 2:30pm in Ferns.