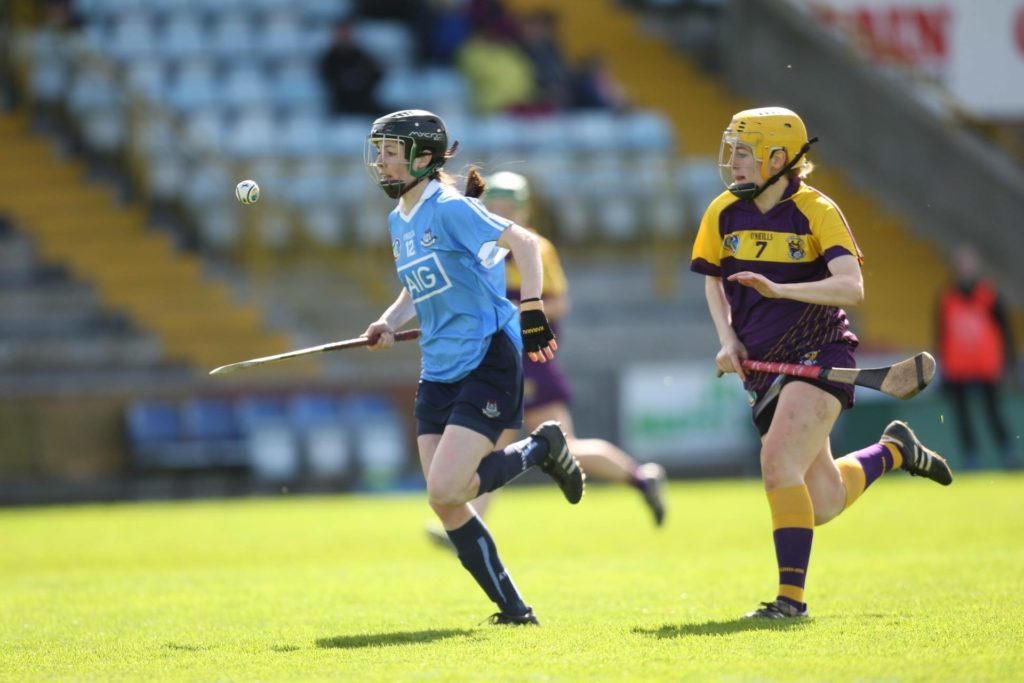 The easiest stats to keep track of during a game are the scores and wides tallies. Important facts but when David Herity and his management team sit down to analyse the video of this game, they will be impressed with the number of turnovers, the hooks, blocks and tackles, the support play, the tigerish aggression of all the players and the four points contribution from the three substitutes introduced.

At one point in the game corner forward Emma Flanagan chased down an opponent to within 30m of her own goals. Time and again wing forward Siobhan Kehoe came out of her own half with rousing clearances and Miriam Twomey covered the middle third superbly.

They will also enjoy noting that Dublin hit only 4 wides in the game and none in the second half and a tally of 0-12 from play.

That said David Herity will have reminded his team in a lenghty post match warm down to keep things in perspective. It was a win that didn’t surprise him. “That performance was coming. In three of our games we were level going into the final five minutes.   We werent that far off in any game bar the Kilkenny match” said the Dublin manager.

Dublin began the first half with the sun and the stiffish breeze in their faces but an Aisling Maher free had them off to a good start in the 2nd minute.

The strength of the breeze could be gauged from a massive 85m free by Ciara Storey that sailed over the post. The breeze and the sun may have contributed to the next score which saw Linda Bolger’s shot for a point dip under Faye McCarthy’s cross-bar.

Both sides operated a sweeper in defence with Gráinne Quinn filling a space 30m from her own goal. That meant that goal chances were few at either end, but even in the early stages of the match, one could see that Dublin were up for the game and time and again they disrupted Wexford attacks.

Great work by Aisling Maher placed Emma Flanagan for a great point in the 10th minute before Wexford’s best forward Linda Bolger cancelled that with a point of her own.

The clever interplay of the Dublin team is obviously something they have worked hard on in training and it was used to good effect in the 13th minute when Arleen Cushen found Aisling Carolan, she set up Ali Twomey whose pass to Siobhan Kehoe was dispatched between the posts.   Aisling Maher narrowed the gap with a free in the 15th minute.

A mistake in the Dublin team allowed Una Sinnott to respond for Wexford to start what would be their best phase of play as they added points from Una Leacy and Bríd Gordon in the 20th minute.

The next 10 minutes of play was critical for Dublin. If they could deny Wexford goals and a burst of points, the game was there for the taking. They did better than that and grabbed the only score in that period – a third pointed free from Aisling Maher to trail by 1-05 to 0-05 at half-time.

For the restart Alison Maguire was introduced at centre forward and she made a telling contribution in the game by cutting down the influence of Wexford’s Aine Lacey.

But this was an all-out team effort and from the restart there was no let up. Thanks to that pressure Emma Flanagan secured possession to float over a great point.

Shortly after this score Doireann Mullany came on, but Wexford found the target in the 36th minute with the first of three pointed placed balls in the second half from Linda Bolger.   They didn’t score from play in the half.

Ali Twomey who had been doing well in the first half, really came into the game with two massive plays. The first was superb catch from Faye McCarthy’s monster puck-outs. The ever industrious Siobhan Kehoe was at her shoulder to take the pass and point in the 36th minute. The game was now going Dublin’s way and the team sensed this and when handed her first touch Doireann Mullany had the composure to take that all-important extra step to improve the angle for a great point.

The leveller took an extra minute, Ali Maguire was putting herself about and won posessition to play the sliothar into the corner to the unmarked Emma Flanagan and her third score brought the sides to parity.

Faye McCarthy was having a largely untroubled time in goals but such is the game of camogie that anything can happen in a twinkling.

A goal at this stage would be a massive lift to Wexford and when Nicole Fortune first-time from the edge of the small box it looked like a green flag would be raised, but Faye got in the way and made the pass to Arleen Cushen for the clearance. Back came Wexford one more time but a superb block by Hannah Hegarty stopped that move in its tracks.

The Dublin half-back line of Hannah Hegarty, Aisling Carolan (who must of have filled every position on the Dublin team bar ‘keeper by now!) and joint captain Eve O’Brien were outstanding for the entire game. Great blocking and striking in evidence as it was throughout the field.

As the game headed for the final third, the team that would get the chance to edge in front was going to be on the front foot heading into the final phase. That chance came to Dublin for a foul on Ali Maguire close to the touch line.   From about 45m out Aisling Maher held her nerve for a great score.

It was the score that propelled Dublin into the home stretch. In the closing 14 minutes Dublin would outscore Wexford by 0-06 to 0-02 and all of Dublin’s scores came from play. It was a clinical finish that we haven’t seen often enough from the team but now is a good time to start.

The surge in confidence was palpable as Aisling Carolan stood defiant against the great Una Leacy. Another massive overhead catch from a Faye McCarthy puck out by Ali Twomey was dispatched between the posts in the 51st minute.

A minute later a great block by Aisling Maher set up Ali Maguire for a class score. The Durcell Bunny herself Siobhan Kehoe cut through the middle to land another point as suddenly Dublin were four to the good.

The danger of a Wexford goal was always a possibility and when Linda Bolger pointed from a free only a single score separated the sides. But on this occasion Dublin were able to respond and Eimear McCarthy put her name on a great point in the 58th minute.

That had the look of a winner but just to make sure Dublin had another ace up their sleeve. In came Zoe O’Donoghue and in added time she created the space and the time to deliver two of the sweetest points you are going to see for some time. Victory and deservedly to Dublin on a 0-16 to 1-08 scoreline.