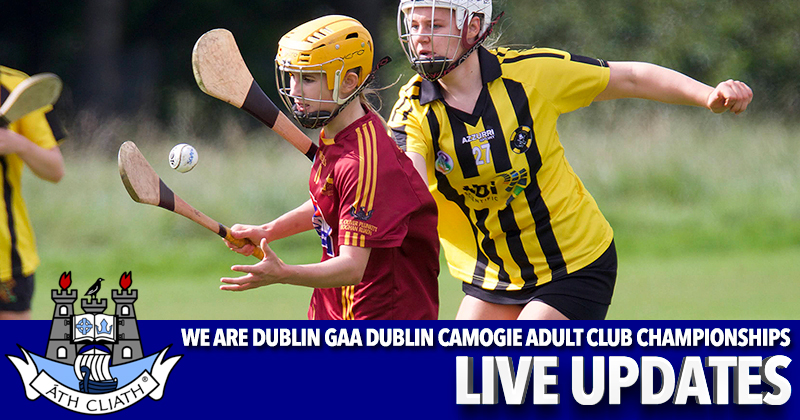 Plenty going on in the county across the day today. Obviously there’s a massive Senior Football Final in Parnell Park between Ballymun Kickhams and Ballyboden St. Endas. But our attention will be on the National Sports Campus in Abboststown where we have two finals in this year’s We Are Dublin GAA Dublin Camogie Adult Club Championships. Both games will be streamed on the Official Dublin Camogie Facebook page. But we’ll have score by score details on both of these deciders.

Erins Isle went three for three in the Inter 1 rounds. And they’ve already met today’s opponents in Championship action this year. Isles saw off St. Vincents B in the opening round before beating Naomh Peregrine by 3-14 to 2-09 in Round 2. And even though they didn’t need it, they saw off Crumlin in Round 3 on a massive 4-17 to 2-05 scoreline. Their Semi Final game against Na Fianna was expected to be closer than it turned out, with Erins Isle winning comfortably by 3-17 to 1-05.

Naomh Peregrine only dropped points to Isles in the Rounds this year and will be hoping not to repeat that this afternoon. They secured wins over Crumlin and Vincents B to finish runners up and then saw off Naomh Brid in a hotly contested Semi Final on a 2-14 to 2-09 scoreline.

St. Oliver Plunkett Eoghan Ruadh and Cuala are primed to take the spoils in this afternoon’s Senior 2 Championship Final.

Plunketts have put in some big shifts in this year’s competition. And interestingly have already faced and beaten today’s opponents Cuala in the Round Robin stages. A 1-10 to 0-09 win over Good Counsel got them off to the perfect start this year. They followed that with their 4-09 to 1-06 win over the Dalkey side. And in Round 3 a 3-12 to 1-06 win over Ballinteer St. Johns saw them qualify for the semi finals and a date with Group 1 runners up Naomh Mearnog. In style they ran out with eight points to spare to reach today’s decider.

Cuala, as already mentioned, dropped points in Group 2 to Plunketts. But wins over Ballinteer and Good Counsel saw them finish runners up in the table. Last week they faced hotly tipped Skerries Harps in their last four clash and ran out 6 point winners on a 1-12 to 1-06 scoreline to advance.

We’ll be live from the National Sports Campus in Abbotstown from the first throw in at 1:00pm this afternoon. And we’ll bring you all score by score updates on www.twitter.com/wearedub. Also don’t forget you can find all the post match reports and analysis from the game right here and on www.facebook.com/wearedub.

DUBLIN THROUGH TO LEINSTER FINAL AFTER SECOND HALF DRUBBING OF KILKENNY