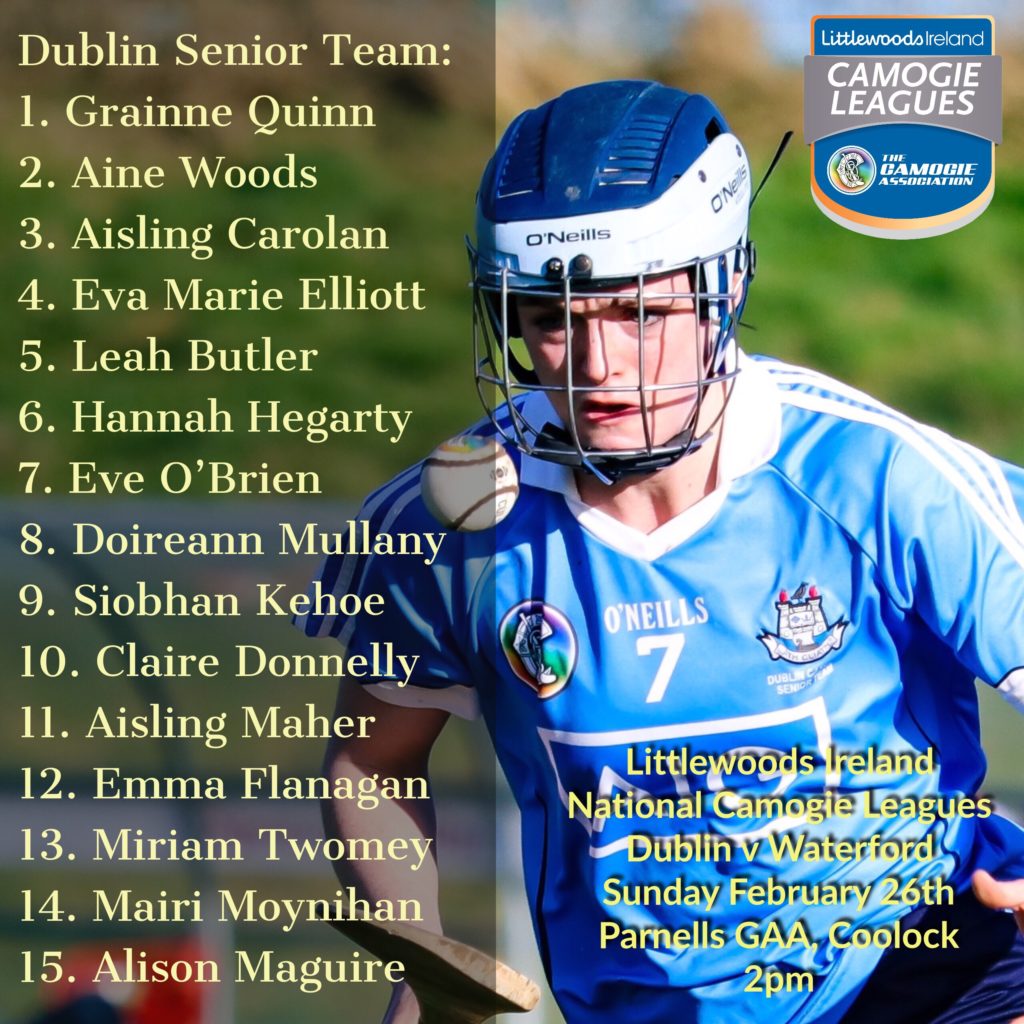 Dublin Senior Camogie manager David Herity has made just one change to the starting fifteen who narrowly lost to Cork last weekend.

It’s not a surprising move considering the team performed brilliantly last weekend and were very unlucky not to take something from that game.

Dublin will have taken plenty of positives from their display in Mallow and considering it’s a new squad to last season and many of the players started in unfamiliar positions, confidence levels must be high going into tomorrow’s league encounter against Waterford.

Dublin defended with intensity and controlled aggression against Cork and their halfback line of Hannah Hegarty, Leah Butler and joint Captain Eve O’Brien really stood out.

In midfield the new pairing of Siobhan Kehoe and Doireann Mullany excelled with their battling qualities and vision, giving Dublin a solid platform to build on, both in attack and defence.

The metropolitan’s front six of Alison Maguire, Emma Flanagan, Mairi Moynihan, Miriam Twomey, Aisling Maher and Claire Donnelly are a handful for any defence and the Waterford backline will need to be on their toes from the off tomorrow or they will concede plenty of scores.

Minding the house for the girls in blue is the tough tackling, uncompromising full back line of Aine Woods, Aisling Carolan and Eva Marie Elliot. If Waterford are to get anything from the game they will have work very hard to get by this Dubs trio.

If they do manage that they will then have to deal with the commanding presence of Grainne Quinn in between the sticks.

The new Dublin goalkeeper has already shown she rules the area in front of the goal with authority, is good under the high ball and a good shot stopper and forward lines will find out throughout the season that goals won’t come easily against the Sky Blues number 1.

Both sides head into tomorrow’s game on the back of narrow first round defeats and will look to bounce straight back to winning ways to get their League ambitions back on track.

Dublin will have targeted their home games as must wins and tomorrow’s game they will have banked on to take maximum league points but it will be a close affair.

But with home advantage and a difficult away trip to face All Ireland champions Kilkenny up next for David Herity’s charges, they won’t lack any incentive or motivation to claim their first league win of 2017.

With that in mind and the impressive performance last week against last seasons All Ireland runners-up Cork, Dublin should claim victory tomorrow by a couple of points in a tight battle with Waterford.

The action gets underway tomorrow at 2pm in Parnells GAA club in Coolock and is one not to miss.