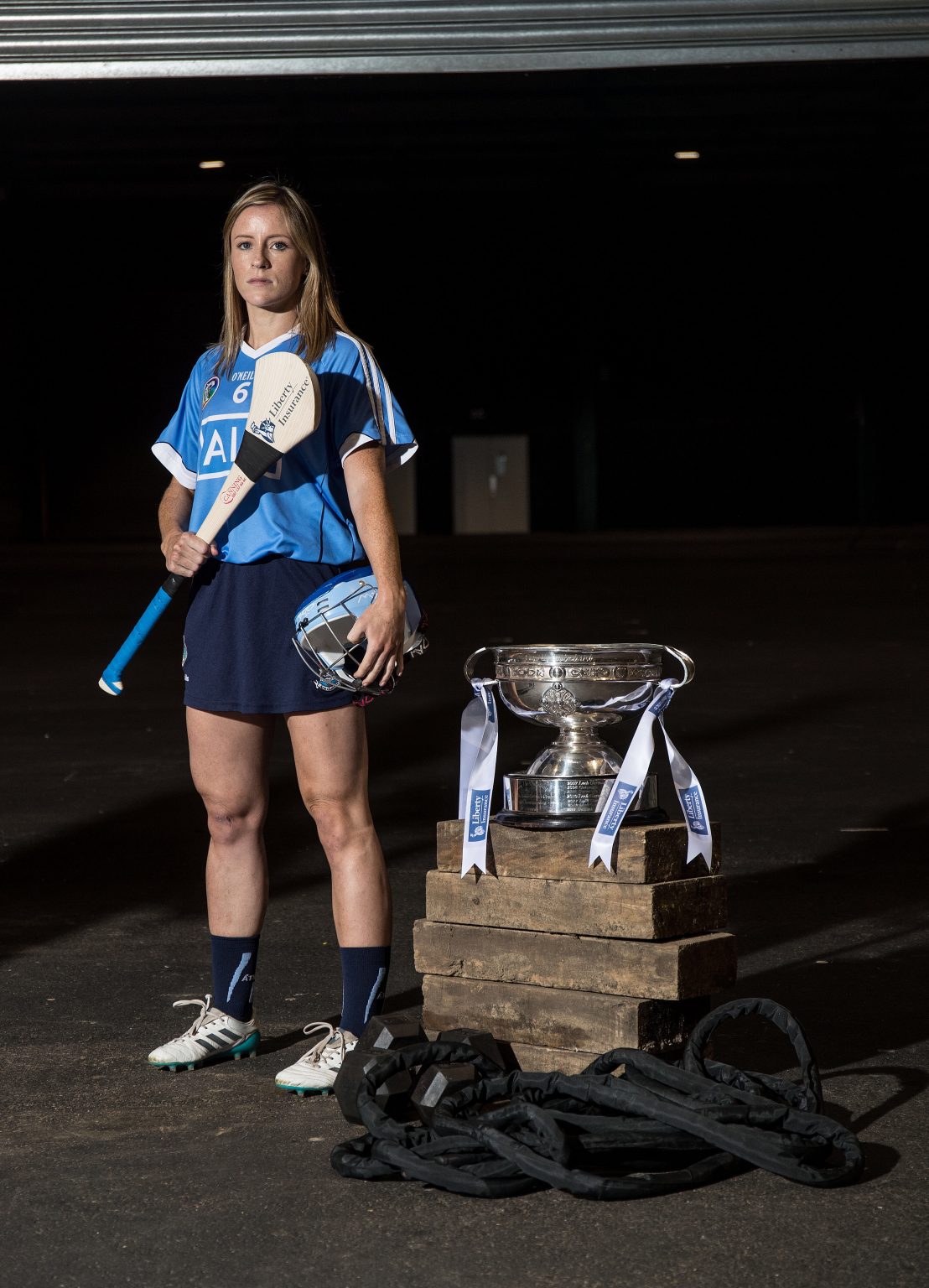 “Bittersweet is the best way to describe it. It was hard to watch but I couldn’t walk away either” – Dublin captain Laura Twomey

WHEN Laura Twomey was just six years old, she hid behind the bushes at Naomh Mearnóg to avoid having to participate in the Saturday morning nursery.

It must bring a wry little smile to the now 28-year-old’s face, spending almost the entire weekend with the youngsters as she did last Saturday and Sunday at the Portmarnock facility, where the foundations were put down for what is, so far, an 11-year Senior career with Dublin.

Much of that has been challenging but buttressing it all has been a passion for Camogie that developed despite that initial indifference.

She enjoys helping out with the next generation but this evening, she will be tending to the present as she leads the Dubs out onto Páirc Uí Chaoimh to take on Galway in the second of the two Liberty Insurance All-Ireland Senior Camogie Championship Quarter-Finals (7.15pm).

Beyond that, she begins a new job next week as national co-ordinator of the Be Active programme being run by the HSE and local sports partnerships.

“It’s up and running in about 800 schools already but there are about 3,000 primary schools in Ireland so we have to try to get it into some of those schools that weren’t so interested in changing. It will be a challenge but I’m looking forward to it.”

The 28-year-old has a teaching degree in PE and biology but stayed on in DCU to do a PhD in cardiovascular health, investigating the science end of physical activity.

She taught science and health promotion courses at Coláiste Dhúlaigh College of Further Education in Coolock and can see herself returning to the classroom someday but for now, attempting to get more children active is the professional priority.

On the pitch, it is about making up for lost time. Twomey has been a regular since being called into the Dublin panel as a 17-year-old but due to a cruciate injury had to content herself with a place in the wings as David Herity’s crew reached the Semi-Finals for the first time since 1990.

She and Eve O’Brien had been named joint-captains about a week when she suffered the cruciate knee ligament injury that ruled her out for the entire season.

She remained involved as a helper, encourager and motivator but watching them do so well when she had endured so many dreadful days in Sky Blue, must have been bittersweet.

“It was the week before the first League game, things were going well and I got that dreaded injury again.

We were playing Meath in a challenge game down there, peak winter… yeah, bittersweet is the best way to describe it.

It was hard to watch but I couldn’t walk away either.

“It was amazing to watch the girls progress and grow together, and overcome one or two of those teams we’d always been there or thereabouts with, like Wexford in the League.

We got that first win over them. I didn’t actually see that one, as it was the day of my operation but I was delighted for them.”

The prevalence of cruciate knee ligament injuries among female sportspeople, particularly in Camogie and Ladies Football, is startling.

Research is ongoing to unearth all the reasons but training programmes are changing to reflect the physiological differences between male and female athletes.

“It’s definitely more prevalent in females. I think it’s a ration of nearly eight-to-one. The way Camogie is evolving, it’s getting faster and girls are getting stronger.

Previously, the emphasis on S & C may have been on strength and building muscle but now they’re trying to marry that with a lot more focus on plyometrics in your balance and flexibility.

You see teams warming up now, doing all their single-leg work, the activation work with the hurdles and jumps.

“At the moment they say it can be as part of your menstrual cycle, there is more of a tendency for it to occur at certain stages.

There’s a little bit of research done on that. That new app FitrWoman could help in terms of research.

“But women are built differently than men so a tailored programme is something to look into.

I remember reading about a soccer team that had something like 12 players who did a cruciate in the year.

They built a strength and conditioning and plyometrics programme and they saw a reduction the following year.

“It’s something that has to be addressed because every year you just hear of the devastating news that someone from another county has done it. Your heart would go out to them.”

Sadly, it has hit close to home once more too. Younger sister Miriam, who was magnificent for Dublin last year, had been commuting from Edinburgh and performing well again this term but her knee buckled early on in the last round-robin game against Tipperary. It’s not looking good.

“We’re not 100 per cent sure what’s going on in the knee but she has a significant knee injury.

The scans weren’t clear because there was a lot of fluid in the knee so she’s just resting it. It’s tough.

“Eve O’Brien, the other co-captain is the same. It’s kind of ironic. I did mine last year and roared on from the sideline. Eve did hers in September and she’s taken on that role.

I don’t think anyone wants to be named captain!”

Twomey took strength from how countless others inside and outside the camp had come back from the injury however and is back in situ at centre-back.

At This Stage Of The Competition AnyThing Can Happen

Dublin may be down up to nine players through injury, retirement and personal commitments but Twomey’s return is a massive boost, while the likes of Emma O’Byrne, Alex Griffin and Róisín Baker are among those to have grasped the opportunity to cement positions eagerly.

Galway will be favourites but being underdogs doesn’t deter this Dublin group.

“At this stage of the competition, anything can happen. Any team is going to be a massive challenge.

Galway have been in the Semi-Final and Final over the last few years and we know what they’re capable of. It’s going to take a monumental effort from the whole team to get over them but it’s something that we relish.

The belief in the squad is there and no-one is going to fear this. We think we can get over them on the day but it’s going to take a massive team effort.

“The girls can draw on last year. No-one gave them a hope in hell of beating Wexford last year even though they’d beaten them in the League.

And even in the Semi-Final against Kilkenny, though Kilkenny won, the girls played well and made it very hard. The girls have that experience now and that should stand to them.”