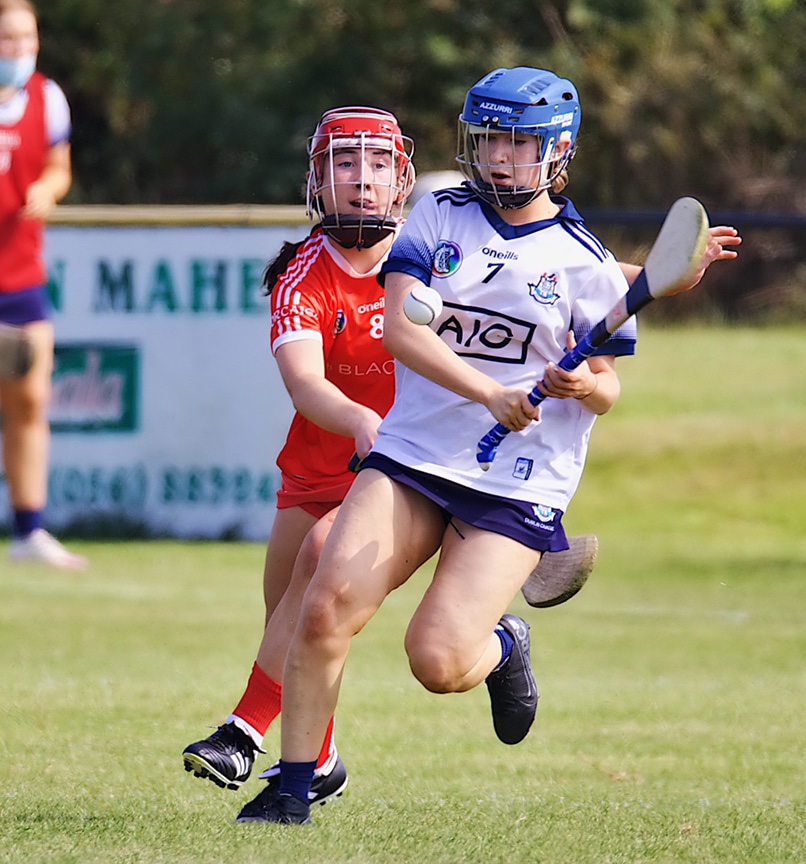 It was the end of the dream this afternoon for the Dublin as Cork’s Minors held on for a one point win in today’s All Ireland Minor Camogie Championship semi final in St Lachtain’s GAA club in Kilkenny.

Dublin will be very disappointed at losing a game that was there for the taking particularly as they played with an extra player for over forty minutes after Cork’s Kate Redmond was sent off on a second yellow in the 20th minute of the first half.

Down to 14 players Cork flooded the middle third of the pitch with players and it proved to be the perfect tactic to nullify Dublin’s numerical advantage and Cork won a huge amount of primary possession and outscored Dublin by seven scores to four in the second half.

With the extra player Dublin twice in the second half had players unmarked in front of goal, but both opportunities were squandered as the player in possession made the poor decision to shoot instead of passing the ball and instead of a possible six points, Dublin managed just one.

Dublin started the game brightly and an excellent point from corner forward Aine Rafter gave John O’Connell’s side the lead after two minutes.

The lead lasted just a minute as Cork’s Rose Murphy drew the sides level with a fine point from play.

But Dublin were enjoying plenty of early possession and two points in as many minutes, the first from play from Aisling Gannon and a converted free from Ellie Young put the Dubs two in front.

A converted 45’ from Eimear O’Brien reduced the deficit but Dublin stretched their lead to three with two points from Aisling O’Neill.

Cork came storming back with three points in a row to draw level, Orlaith Cahalane and Meadhbh Ring from play and Eimear O’Brien with another successful free attempt.

Cork were in the ascendency but in the 15th minute half forward Kate Redmond was penalised for a barge and received a yellow card.

Dublin’s Ellie Young converted the resultant free to give Dublin the lead again but Cork swept back down the field and Orlaith Cahalane swung the ball over the bar and it was all square again.

Then in the 20th minute disaster struck for Cork as Kate Redmond was sent off on a second yellow for another barge.

Two minutes later Dublin’s Ellie Young grabbed another point, Eimear O’Brien drew the sides level from a 45’ and despite their numerical disadvantage Cork were lording the possession in the closing minutes of the half.

But under intense pressure from the Dublin backs they struggled to convert that possession into scores and hit three wides in a row. As the first half headed into injury time Cork grabbed the lead with a point from midfielder Ciara Golden.

It would have been a psychological blow for Dublin if they had went in a break a point down, particularly considering they played the final ten minutes of the half with a player extra.

But a great point from half-forward Annabelle Timothy made sure the sides would head into the dressing rooms at half time all square at 0-08 apiece.

With time to reorganise and figure out how to use the extra player to their advantage it would have been expected that Dublin would come out all guns blazing and take control of the contest.

But it was Cork’s Minors who flew out of the blocks and a converted free from Meadhbh Ring and a point from play from half-time substitute Orlaith Mullins gave them a two point lead.

The Dublin response was swift, the ball was worked down field to Annabelle Timothy about 45 metres out, Annabelle struck a shot towards the Cork goal, a Cork and Dublin player ran across the keepers eye-line towards the ball, but both missed it and the ball zipped past the keeper and into the net.

Dublin’s Aisling O’Neill added a point and suddenly the Dubs went from two down to two in front.

But Cork’s tactic of flooding players around the middle third allowed them to dominate the ball and they scored the next four points from Aimee Morgan (2) one from a 45’ and a converted free and one each from Orlaith Cahalane and Rose Murphy to lead by two with eleven minutes to go.

Dublin needed a change in tactics and scores, but surprisingly they stuck with the sweeper system which played into Cork’s hands and allowed them to make it very difficult for Dublin to win primary possession.

With six minutes left on the clock Róisín Ní Chathasaigh did pull a point back for Dublin. But they couldn’t conjure up the equaliser and in the final minute of normal time Orlaith Mullins extend the Cork lead back out to two.

Dublin pushed forward and two minutes into injury time a converted Ellie Young free left the bare minimum between the teams, but Cork’s Minors held on to secure the win and Dublin were left to wonder what might have been.