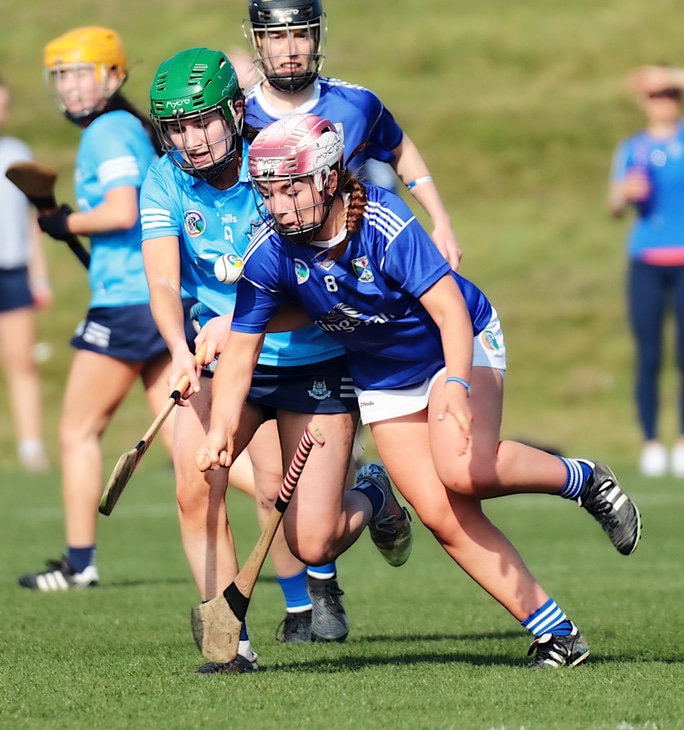 The final scoreline though is not a fair reflection of the game which was competitive throughout. Dublin started slowly and conceded two very soft goals in the opening three minutes.

Dublin’s Intermediates enjoyed plenty of possession in the second half and despite conceding a third goal ten minutes into the second fought their way back into game and with two minutes left on the clock were very much within touching distance of Cavan with just four points between the teams.

But the concession of two late goals stopped them in their tracks and Cavan maintained their unbeaten league run with eleven point to spare.

Dublin were caught cold at the start of the game and two high balls towards the square weren’t dealt with by the Dublin defence and keeper and Cavan’s Shanice Fitzsimons pounced on the mistakes to hit the back of the net twice and Dublin found themselves six points adrift with just three minutes gone in the game.

A converted free from Niamh Comerford and a point from play from Aoibhe Dillon reduced the Cavan lead to four points.

A point from Cavan half forward Aishling Keenaghan was followed by two super points from play by Dublin’s Chloe O’Connor and Niamh Comerford to leave three points between the teams.

Cavan though doubled their lead thanks to three points from Clodagh Keenaghan, two frees and a 45’ and a point from play from Eimear Brady with just a single reply from Sublin coming from a Niamh Comerford free.

In injury time at the end of the first half a Dublin free swung towards the Cavan square was flicked to the net by Ciara Holland to half the deficit. But Cavan had the last say of the half with another point from a converted free from the ever accurate Clodagh Keenaghan to leave the score at the break 2-06 to 1-05 in favour of the Ulster side.

Keenaghan continued the second half as she had ended the first with two successful free attempts either side of a point from Dublin’s Chloe O’Connor.

Dublin though were enjoying the lions share of possession in the early stages of the second half but failed to turn possession into scores hitting three wides in a row.

Those missed opportunities were punished by Cavan, Shanice Fitzsimons gathered the ball near the endline turned past her marker and flicked the ball to the net for the Ulster sides third goal. Eimear Fitzpatrick added a point and suddenly the lead was pushed out to nine points.

A converted free from Dublin’s Niamh Comerford and a point from play from Clodagh Keenaghan left the gap at nine points with ten minutes left to play.

A Niamh Comford point from a free was followed seconds later with Dublin’s second goal, Aoibhe Dillion’s point attempt from the right wing hit the post and second half substitute Carys Daly was quickest to react to smash the ball to the net. Another pointed free from Comerford followed to leave four between the teams with three minutes left.

But with Dublin chasing the game they lost the shape in their defence and Shanice Fitzsimons pounced with two goals either side of Hannah Fitzpatrick point.

The final scoreline was harsh on Dublin and flattering to Cavan and certainly not a fair reflection on the sixty plus minutes of action that had preceded the final whistle.

With the league now complete Dublin’s Intermediates will now begin their preparations for the upcoming Leinster championship in a couple of weeks.