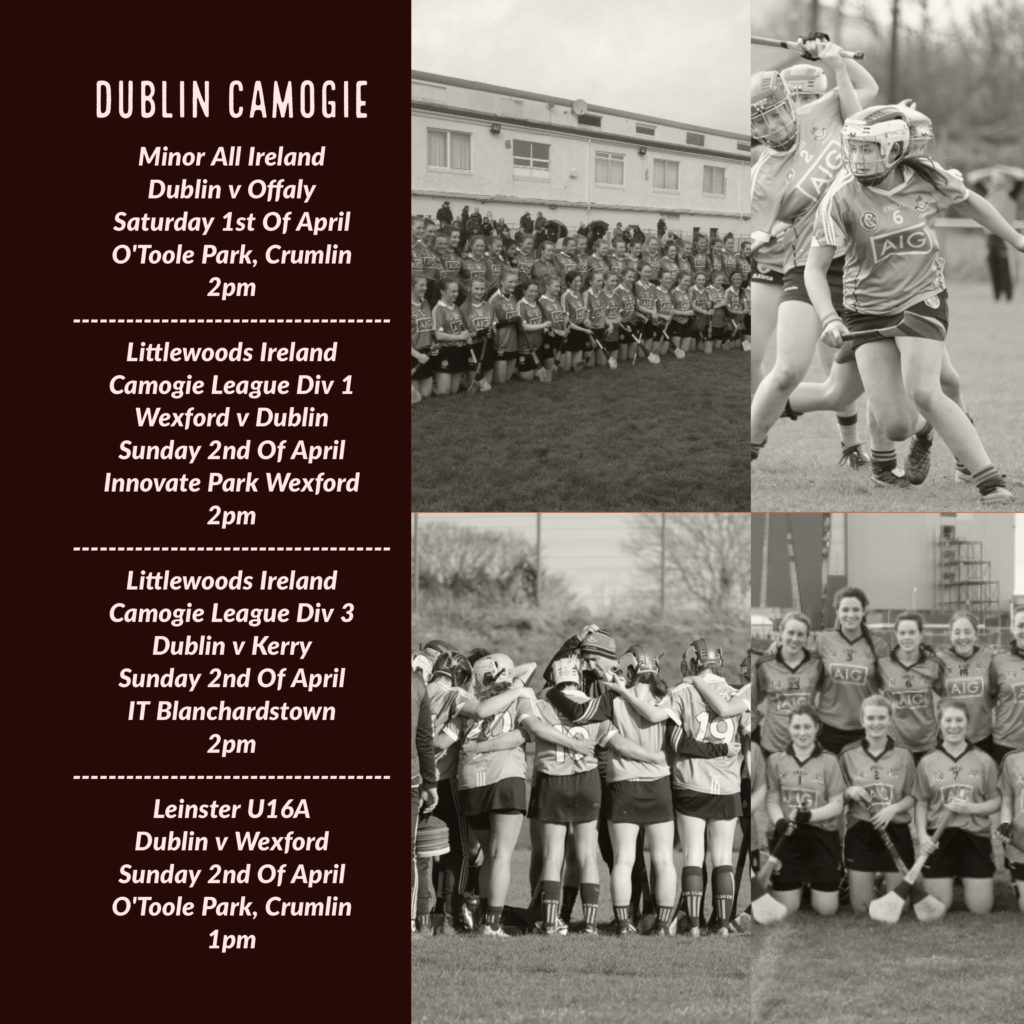 It’s a very busy weekend for Dublin Camogie’s adult and underage squads with the Senior, Premier Junior, Minor and U16A teams all in action.

First up on Saturday it’s the turn of the Dublin Minors who face Offaly in a vital game. Dublin currently sit in third place in their group level on points with Tipperary who have played a game more.

Dublin need either a victory or a draw to advance to the All Ireland Championship semi-finals, a loss will see them miss out on scoring difference.

There are three games on Sunday the first of those involves the U16A squad who are in Leinster Championship action at 1pm in O’Toole Park in Crumlin as they face Wexford.

Dublin head into the game on the back of a brilliant win against Kilkenny the last day out. A win over Wexford on Sunday will guarantee the young Dubs a place in the semi-finals. Wexford also had a good win over Offaly in their last game and will head to the Capital brimming with confidence which sets the game up nicely and should be an exciting clash between two very good sides.

The Dublin Senior squad head down the south east coast to Innovate Park to finish off their League campaign against Wexford. Dublin can’t make the semi-finals but they will be looking to end the League on a high with victory ahead of the start of the Leinster Championship.

In a very difficult group it’s been a steep learning curve for both the players and new management, but performances have steadily improved through the campaign and Dublin were extremely unlucky to not get at least a draw against Tipperary in the last round of games. A win on Sunday would be a well deserved reward for all the effort that has been put in by all involved and would certainly be a huge confidence booster ahead of the upcoming championship.

The Dublin Premier Junior Squad play the last group game of their League campaign on Sunday in IT Blanchardstown at 2pm against Kerry.

Dublin have already qualified for the League semi-finals with three wins from three, as have Kerry who have been as equally impressive in their three previous outings.

The result of Sunday’s game will determine who finishes top of the group and will play the fourth placed side in the semi’s. Currently Kerry hold the number 1 spot on score difference but a win for the girls in blue will see them leapfrog them and earn on paper, what could be the easier of the semi finals.

What will be of more interest and significance though is that Sunday’s game involving the top two teams in the division could very well be a pre-runner to the actual final as both sides would be the favorites to make the league decider.

So a win for either team could give them a big psychological advantage ahead of a potential League Final meeting in a couple of weeks.