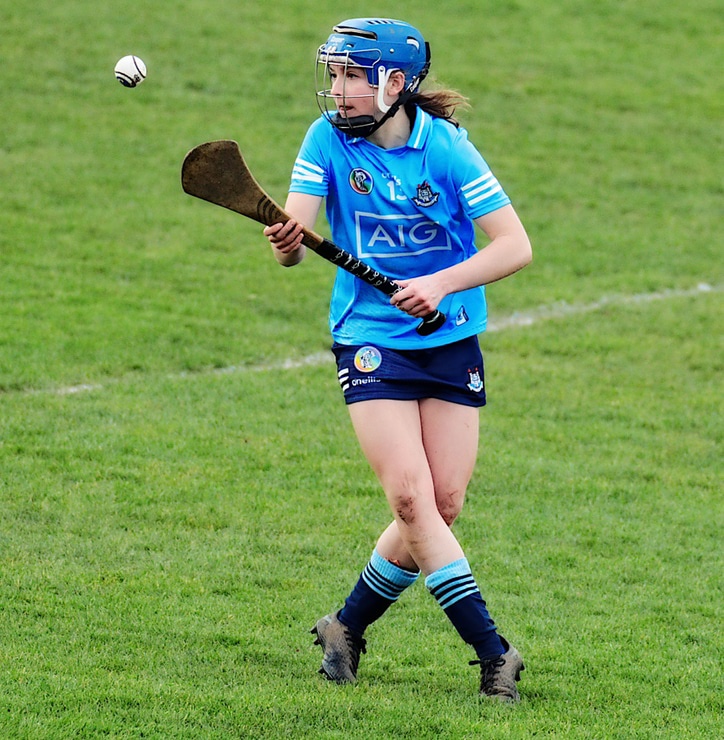 Dublin recorded their first league win this afternoon with a thirteen point win over Offaly with Aisling O’Neill the standout performer in the game.

It was extremely windy in Moneygall GAA today making playing conditions difficult. Dublin though coped well using clever short passing out of defence and balls into the channels to a constantly mobile full forward line.

By half-time Dublin an eight point lead thanks to five well struck frees from Aisling Maher and a goal from Aisling O’Neill.

Vice-Captain and chief free taker Maher picked up a knock before the break and was substituted at half-time.

The free taken duties were handed to O’Neill for the second half and the young star who was playing at the minor grade last season showed no nerves and nailed two excellent frees into the teeth of the wind.

Aisling added a couple of fine efforts from play as well to finish top scorer with 1-05.

Overall it was a fine team performance, Dublin were solid at the back denying Offaly very few scoring opportunities.

Half backs Hannah Hegarty and Emma O’Byrne swept up in front of the full back line and drove forward linking up well with the midfield and half forward line.

The forward unit was a handful all game tracking back when needed and constantly on the move in the attack to provide viable options.

Dublin grabbed the lead four minutes into the game with a pointed free from Aisling Maher. Maher doubled the lead a minute later with another well struck free.

Offaly were struggling to get on any meaningful ball due to the workrate and constant pressure from Dublin.

That pressure told in the eight minute, Dublin turned the ball over, the ball was played into Niamh Gannon who turned her player and took off towards the goal, Gannon unleashed a fierce shot at goal which Offaly goalkeeper Eleanor Clendennen did well to save but Aisling O’Neill pounced on the loose ball and buried it to the net.

A point from play from O’Neill and a third converted free from Maher put Dublin seven points in front with eighteen minutes gone on the clock.

Offaly finally got off the mark with ten minutes to go to the break courtesy of a pointed free from Sarah Harding.

But two more successful free attempts from Maher gave Dublin an eight point lead at half-time with the score 1-06 to 0-01.

Dublin lost Maher for the second half with a knock just before the short whistle and was replaced by Kerrie Finnegan who impressed with her high fielding and clever use of the ball.

With Maher gone the free taking duties were taken over by O’Neill who knocked over two super frees in a row to extend the lead to ten points.

Four more unanswered points in as many minutes, two from O’Neill and one each from Jody Couch and Niamh Gannon rounded off the scoring for Dublin.

Offaly grabbed their second point of the game in the final minute with a free from Sarah Harding.

Next up for Dublin is another trip away and a meeting with Tipperary.